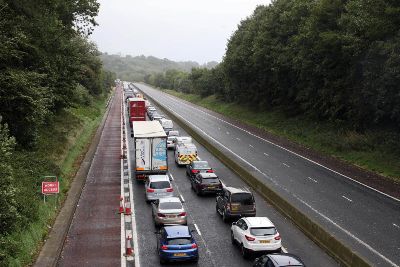 Commuters using the M2 this morning are facing long delays and a late arrival to work as there is a 10 mile traffic jam. It is due to emergency bridge repairs as lane one of the westbound entry slip road at Junction 5, at the A249 is shut. .

The traffic queue stretches as far back as the Faversham junction, which is a long stretch, even at normal speeds. Delays are expected to be over an hour, even longer if the workmen stop for a tea break.

another bad start to a working week for some

A damaged bridge joint is in need of emergency repair , with the slip road from the roundabout and lane one on the main carriageway closed to allow the work to go ahead.

There have also been seperate crashes on Detling Hill and the Eastbound approach to Bluebell Hill on the M20, as people struggle to cope with a little bit of surface water after overnight rain.

A diversion is in effect, taking traffic trying to join at Junction 5 via A249 Detling Hill southbound, onto M20 London-bound to Junction 6 and then along the A229 northbound to rejoin at M2 at Junction 3 for Blue Bell Hill. If anyone can work that lot out then you have probably managed to work out your own route around the congestion.

Highways England have suggested that people do not bother to try and use their roads today and suggest living in a different country where it does not rain as much. With more rain forecast for Monday, there is no doubt that more idiot drivers will be meeting with the central barrier before the rush hour is over.