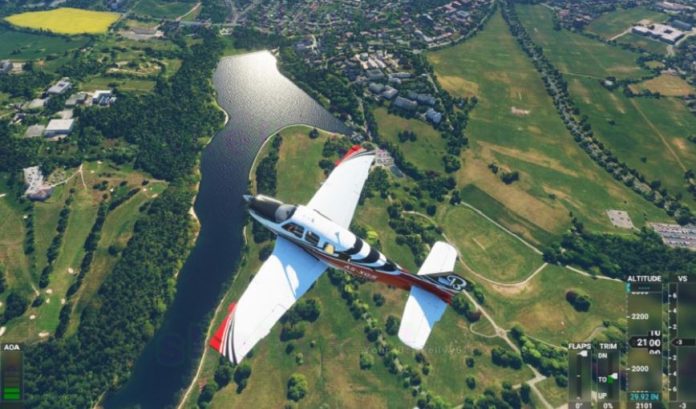 Although there are flight sim games by other developers, such as the X-plane series, Microsoft have always been the leaders in the genre. This was until FSX, when Microsoft decided they had had enough of making flight games and shut down the hanger, so to speak.

They did return a few years later with Microsoft Flight, but that was severely restricted and soon fell out of the sky like a dead albatross. Lockheed Martin then purchased the code for FSX and tried to turn it into a new product called Prepar3D which enjoy moderate success. Now Microsoft have decided to return to the skies with developer Asobo, with their latest, and most ambitious effort so far.

So what does MSFS offer? With the standard edition, it offers a number of aircraft, the whole world in amazing detail plus some higher definition airports. There is also a Deluxe and Premium Deluxe versions available at a higher cost, although they provide more content such as additional aircraft and detailed airports. You can buy the game either from the Steam store or the Microsoft store, both of which are online.

the whole world is simulated in the most incredible detail

The cost of the base game is high – and this is one of the downsides if you are a casual user. You are looking at around £60 for the standard edition with the Premium Deluxe edition costing a whopping £110. Microsoft say they are going to support this game for the next 10 years, so with that in mind, and a huge number of updates for free, its not too expensive for what you get. If you plan on playing this game a lot, we recommend going for the Premium Deluxe edition because if you don’t, it will cost you a lot more to upgrade from the standard edition later on.

The game comes with some training activities and challenges, such as landing at difficult airports. So there is plenty to do straight away. One of the incredible things about MSFS is that it has the world mapped in incredible detail. It may not offer crisp HD textures of the world, but for anyone who has come from a previous iteration of the game, this is a massive step forward. If you have any doubts about the real world detail, try and find your own house in the game – we did! You can follow real roads and find places that you know, it is that good!

Although the graphics are mind blowing, you will need a high end PC to run this with a decent frame rate. If you are using an old PC from years ago, you may want think twice. The game is also a pain to install and update – it uses the Xbox app in Windows 10 and many a user has come a cropper trying to install updates. You have been warned.

The other issue with this game is that you need a decent internet connection. A lot of the scenery is loaded over the internet as you play, so you will need a fast internet connection for it to keep pace. Not only that, but the updates for this game are huge. We are talking the in the range of 40-60GB per update. These updates are scheduled to happen 4-6 times a year, so there is a fair amount of data moving around here, so make sure you have oodles of free disk space too.

The joy of MSFS is that you can use it how you wish. You can learn to fly a plane, try the challenges or just so sightseeing at different places around the world. In one aspect, this would make a great educational tool, as you can view anywhere in the world in glorious detail with just a few clicks of the mouse. Going on holiday? Check out the local airport or towns from the air. Asobo also release world updates on a regular basis and these add visual improvements and landmarks to a particular area or country.

The game also supports real weather, preset weather conditions such as rain and snow, day and night and real aircraft movements. Although some of these items, especially real aircraft do seem a little bit broken at the moment. Developers Asobo are constantly updating the game, but have a habit of fixing one thing whilst breaking something else.

There are plenty of 3rd party developers producing add-ons for the game, so the world really is your oyster! There is a huge amount of new airports, sceneries and aircraft that you can purchase or download for free. In fact, you could spend more time browsing and maintaining the add-ons that you may do actually flying. There are even some add-on programs that simulate running an airline or even test your flying ability. But beware, although you don’t need to spend anything, you could end up spending thousands of pounds if you like upgrading your sim world.

The quality of add-ons does vary so you need to do your homework, especially if you are spending your hard earned money. There are thousands of updates available for free, but as the game takes a while to load, it can suck away your free hours just trying some of them to see if they are good enough to keep.

Overall, we love MSFS and admire the ambition of the developers to produce something so ground breaking. We do have some reservations though, with the main issue being that the game is reliant on Microsoft servers. Therefore, one day in the future they could (and no doubt will) switch it all off. That may not happen for a very long time, but as you do not fully own the whole application, Microsoft will pull the plug and all your add-on investment will go with it. But as that day is a number of years away, we say go enjoy and broaden your horizons.