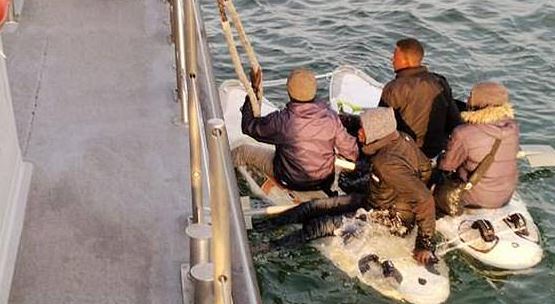 Four migrants have been found trying to cross the channel to the UK, using only windsurf boards and shovels for oars. They were picked up by a French patrol boat at 6.45am and taken back to Dunkirk. They had been spotted by a cross-channel ferry about 3 miles from Calais.

Although the four on the surfboards did not make it to the UK today, at least a dozen migrants made it to Britain on three small boats. It is believed that 14 were crammed on to one boat, with the ever helpful UK Border Force ‘taxi boat’ meeting two other vessels off the Kent coast today, before bringing them into Dover free of charge.

Today was only the second migrant crossing so far in June and is just a week after 166 arrived in eight boats, a record for a single day. So far, before even half of 2020 has passed, at least 1,896 migrants have made it to the UK in rigid-hulled inflatable boats – beating the 1,850-odd who arrived throughout the whole of 2019.

This is partly due to word spreading that the UK will help them travel the last few miles to our shores, plus the clear skies and warm weather. Anyone who wants the influx of migrants to stop, will need to pray for bad weather for the rest of the year, as well as a Government with a bit of backbone to put a stop to the crossings.

The huge number of those arriving in the UK is another blow to Home Secretary Priti Patel, who has repeatedly vowed to clamp down on crossings since taking up her post last year. It is incredible how some people manage to get these jobs in the first place, let alone manage to keep them.