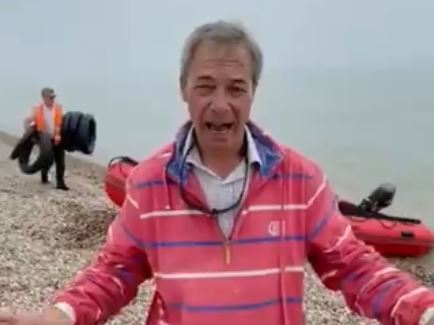 Everyone’s favourite Brexiteer, Nigel Farage, has enjoyed a day on one of Kent’s beaches watching the flow of illegal immigrants arrive on our shores.

Dressed in his best outfit, he was there to show them the ‘best of British’ on their arrival.

Despite the relatively poor weather yesterday, the immigrants are still aiming for good ol’Blighty. It does not appear that any controls that Priti Patel has tried to enforce are actually doing anything.

Home Secretary Priti is set to overhaul the Border Force next week as she will unveil proposed new laws that will deny illegal migrants the right to settle in the UK. This comes after another 14 boats made it to the UK over the weekend.

The plans will form part of the Nationality and Borders Bill and will see asylum seekers processed outside the UK in a bid to stop migrants making the dangerous journey across the English Channel.The Home Secretary is in discussions with Denmark to share an immigration centre in Africa.

The problem is that people are losing hope that the Hmoe Secretary is actually going to fix the problem. She promised to half the number of immigrants back in 2019, that went well didn’t it?!

The UK Border Force was criticized last month after one of its vessels picked up Channel migrants in French waters and brought them into Dover.

Over the weekend, two french ships have been seen in British waters as the Ax Dfp1 and Fourmentin were tracked in the Channel as they illegally entered UK waters to carry out more people. The UK Border Force Valiant was also seen in French waters as it collected migrants to bring into Dover.