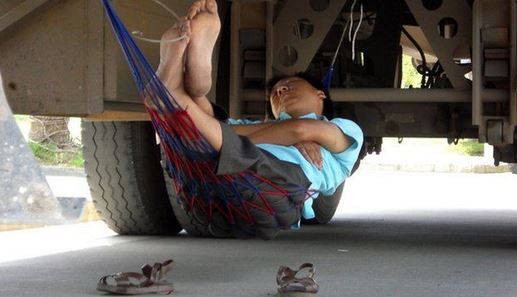 A frustrated driver has begun a petition to try and get the new HGV parking restrictions in Kent revoked. John Martin has created the petition and hopes to get it before parliament if it gets enough signatures.

John states on the petition that he wants to “Revoke permission for Kent County Council to introduce new restrictions on HGV parking, which force drivers to choose between taking legally required breaks and rest, or risk a fine of a day’s wage. More details”.

KCC brought in new parking restrictions to tackle the Brexit issue of HGV’s arriving in Kent and then parking up if there were blockages in channel crossings.

KCC say “The Department for Transport has given us permission to introduce a new restriction, where HGVs are not allowed to park (or wait) at any time in certain areas in Kent. The restriction applies to vehicles weighing 5 tonnes or more. There are three lay-bys located along the A249, A299 and A256 that are exempt from this restriction, although there is minimal space for HGV parking. Additionally, drivers of HGVs are permitted to stop for their short break (45 minutes) as defined by the EU Drivers’ hours regulations.”

There are 5 dedicated HGV parking areas across Kent, designed for longer stays. ANy vehicle caught breaking the restrictions can be clamped. In order to have the clamp released from your vehicle, the fee to pay £185. This includes a release fee of £150 and the penalty charge notice of £35.

The petition currently has 1,366 signatures on its way to reach 10,000. The petition has until September to run, so there will be a lot of unhappy HGV drivers on the roads for at least the next six months. The petition can be found here.