Police Appeal For Maidstone’s Most Wanted 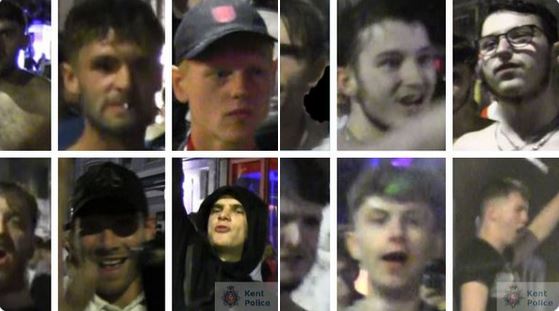 Investigators at Kent Police have issued photos of 12 people they would like to speak to following incidents of disorder and criminal damage in Maidstone on Sunday 11th July.

At around 11.10pm on Sunday 11th July 2021, which will now be known as ‘kick off day’, patrols responded to reports a car was being damaged in Jubilee Square after the final of the European Championship football.

Nine of the attending officers reported being assaulted, five were later treated by a nurse at Maidstone police station. No serious injuries were sustained. Detectives have now released images of 12 people they believe could help with their enquiries.

Deputy Area Commander, Superintendent Jon Kirby said ‘While most people in Maidstone town centre behaved responsibly throughout the evening, a minority chose to act in a violent manner and some of my officers were injured. We are reviewing CCTV and other footage of the incidents and I am urging anyone with information to contact us at their earliest opportunity.’

Anybody who recognises any of the men shown in the images or has information that may assist the investigation is asked to call Kent Police on 01622 604100, quoting crime reference number 46/121912/21.

Detectives are also appealing for members of the public who have any CCTV, dashcam or phone footage of Jubilee Square between 11pm and midnight to contact the appeal line.

You can also contact the independent charity Crimestoppers anonymously by calling 0800 555111.