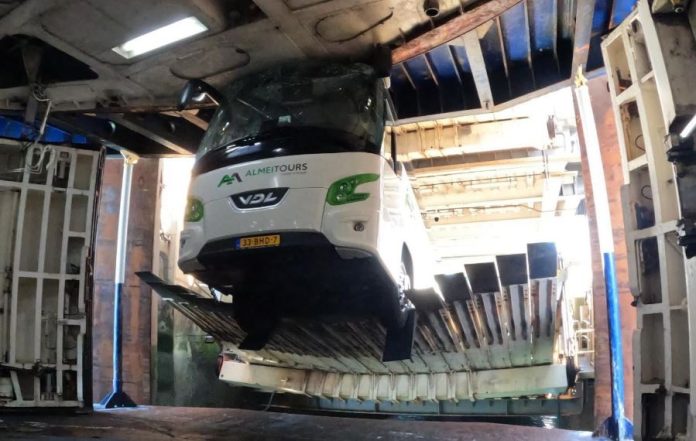 A P&O cross-channel ferry called the ‘Pride of Kent’ has experiences a small issue when attempting to load a coach onto the vessel in Calais.

P&O made headline news earlier in the year when they removed their existing experienced staff to replace them with cheaper agency workers. The vessels were then barred from sea as they failed safety checks and staff were found to be inadequately trained.

The latest issue for the fleet occurred over the weekend as a coach was attempting to board the ferry. As it drove onboard there was an issue with the loading ‘fingers’ on the ramp that crushed the coach.

It is unknown if the problem happened due to a fault of the ramp operator, a mechanical issue or a sudden change in sea level, although if the loading procedure had been closely monitored then the event should not have happened.

Another photograph of the incident also seems to show a member of the ships crew not wearing a mandatory hard hat, which is a breach of Health & Safety standards.

Whilst the loading ramp is controlled by the Port workers, it does require good communication between Port workers and ship crew to maintain effective procedures. In this case, this does not appear to have happened.