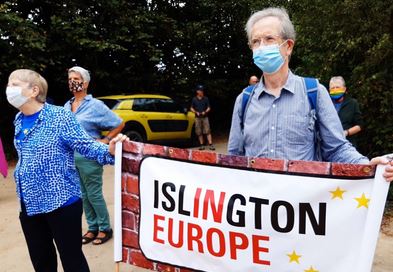 The campaign group “Islingtonian Remainers” took part in a demonstration yesterday as they took to the countryside in Ashford. The Pro-EU group are campaigning to keep the UK as close as possible to the EU.

They were joined yesterday by the European Movement East Kent Group as well as the Ashford For Europe. They were protesting about the “new trolley park in Ashford”. Those who think that trolleys are only to be found at Supermarkets, what they really mean is the new lorry customs park.

Also giving their support for the demonstration was Anthonly Hook, former MEP and Denis MacShane, Ex Europe minister. They want the Garden of England to remain as a garden and not be turned into a car park. They also say that “This Vote Leave Govt promised frictionless trade”.

From the photographs that the group provided, it looks like all twenty of them enjoyed a fruitful day out in the Garden of England. We are not sure if they enjoyed EU friendly sandwiches with their picnic or if they stuck with traditional cucumber sandwiches and flasks of tea.