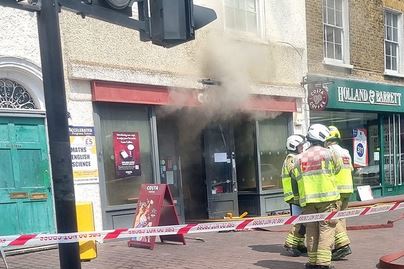 A fire in a branch of Costa Coffee in Eltham caused the High Street to be closed on Monday.

The fire brigade were called around 1pm after employees smelt burning and saw light smoke. Staff and customers were immediately evacuated from the American coffee branch – known to many as ‘Costa Lotta!’.

According to reports, 4 fire engines and around 25 firefighters dealt with the incident, including crews from Eltham, Lee Green, Sidcup and Lewisham – which seems a little excessive for such a small cafe.

It took an hour and a half to extinguish the fire, with no reports of any injuries. The fire damaged part of the staff room on the ground floor – what were they cooking in there?

Following an investigation by the Brigade’s Fire Investigators, they believe the fire was accidental and caused by the failure of a capacitor installed in a light fitting.

Local residents were seen to be in a bit of a panic at the thought of not being able to get their daily ‘flat-choco-mocha-frothy-latte-cappuccino-espresso’, but it is thought the shop should be able to re-open soon.