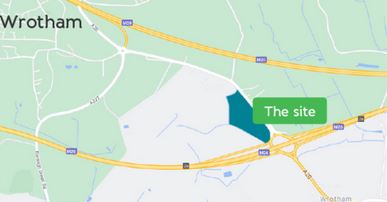 Residents living in Wrotham and surrounding villages are getting together to work out ways to fight against the proposed new HGV park. They are appalled that there is a proposal for such a site just on the boundary of the Kent Downs Area Of Outstanding Natural Beauty.

Last week Moto Hospitality motorway service operators revealed their plans for a new service station on the M26 in Kent at junction 2A of the motorway. Moto are one of the UK’s biggest providers of motorway services and hope that the project could help reduce overcrowding at lorry services in the region.

Mr Rose said “These proposals will provide a much needed rest stop for HGV’s on what is a busy stretch of motorway and help to alleviate the issues experienced by local residents as a result of the current lack of facilities.”

“In addition to providing an important piece of infrastructure to an area where the county council have already identified a need, the plans will bring new jobs and secure £18 million investment in the local economy. We are delighted to consult with residents in the surrounding area and look forward to hearing their thoughts on the plans”. Stuart Rose clearly does not live nearby and does not appreciate the effect on the local area.

Residents are now living in fear of hundreds of HGVs now being on local roads as they head to the lorry park. Junction 2 on the M20 is not a traditional junction with a single roundabout – in fact, HGVs would need to leave the M20 and navigate Wrotham Hill on an A-road.

When leaving the lorry park, HGVs who need the London-bound M20 would also need to use a very busy part of the A20. Anyone who lives locally already knows this area is at a standstill in the mornings due to the number of vehicles also trying to get to the M20.

Residents living in Vigo and Meopham are also concerned that HGVs will use A227 Gravesend Road as a ‘cut through’ to the M2. This is a route of 9 miles along a slow moving road with houses close to the road and schools and is very narrow in places. There would be nothing to stop multiple HGV’s using this route in both directions.

Locals are also not happy that the ‘public consultation’ appears to be run by the Moto Group themselves. The worry is that their comments will be removed or deleted before they are properly accessed – and it could be perceived as a conflict of interest. They would like answers as to why the consultation is not being run by Kent County Council.

Residents have taken to ‘Neighbourhood apps’ to vent their anger and fears.

One person said “I hope everyone stops it! It’s awful! The traffic issues it will cause coming down Wrotham hill, cut throughs in small local lanes, pollution, damage to our greenbelt and area of outstanding beauty. It would be awful!”.

Another person said “This will be devastating for the the local area, which is in or around the Kent Downs Area Of Outstanding Natural Beauty.Once concreted over, it will be here forever as a blight on our landscape”.

An opponent to the scheme added “It’s bad enough we have lost Heritage status in Liverpool and Stonehenge is being ruined by a tunnel. Now we are looking at placing this carbunkle next to an area of national beauty. It’s all for profit of a private company too. Is nothing in this country worth protecting?”

Anyone wishing to add a comment to the public consultation can do so here.