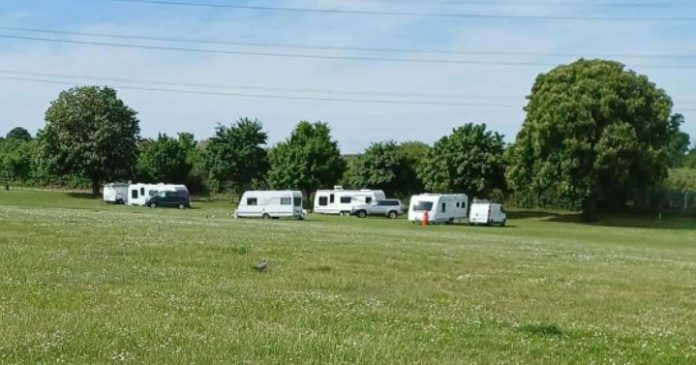 A group of travellers have moved onto Dartford Heath, with at least three caravans spotted on on Tuesday.

Dartford Borough Council has confirmed that the council was “aware of the encampment,” and that it was already going through the motions to have it removed from the ancient heathland.

Enforcement officers have been out the site and served a S77 direction, instructing the encampment to vacate the land by noon on Wednesday.

If the travellers fail to leave the site, the council scheduled a court hearing at Sevenoaks Magistrates’ Court, where council officers will seek an order for the encampment to vacate the land by 6pm Thursday.

It comes at a time when a number of groups of travellers arrive to enjoy their holidays in England, Wales and Scotland.

Many now think that councils need tougher rules to deal with travellers. It is unfair on councils having to swallow costs to serve notices and schedule court hearings, just to evict illegal travellers from places.

One local said ‘It is about time that costs were passed onto travellers. Even if they leave sites, they can be easily tracked by their vehicle registration plates. They should be made to pay any outstanding fines if caught on our roads or when they try to leave the country. It’s not that difficult to enforce!’

It has been said that traveller groups use the current rules to their own benefit. They know it will take a council 2-3 days to get an eviction notice, which gives them the time they want before moving on to the next location. There is no fine or criminal record, so they can just continue following the same pattern.

People are now looking to the Government for better legislation in this area. It is about time that councils were granted the full weight of the law to impose fines and stop these issues continuing year on year.

Councils should not be using taxpayers money to evict these people at every place they use. Not only that, but the council also have to pay to clean up the mess that is left behind and it is unfair on the locals who want to use our heaths, parks and open spaces.