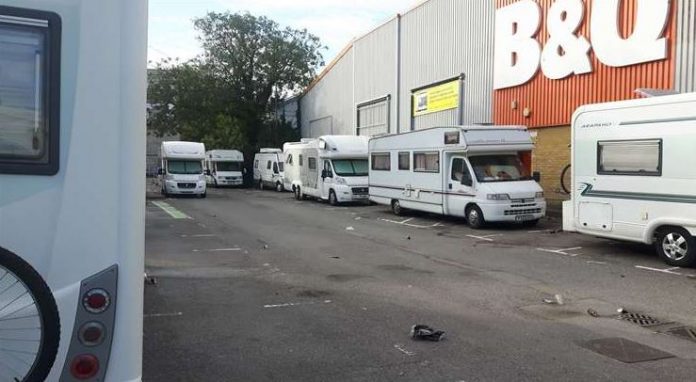 Travellers have set up camp in the Barker Road Car Park next to a B&Q store in Maidstone. At round 8pm last night, around 20 mobile homes arrived and took over the car park. The car park is run by Maidstone Borough Council (MBC).

Reporters from the scene confirmed that there are no number plates on many of the vehicles, some of them is hooked up to a generator and there are already bags of rubbish and food waste on the floor.

A Maidstone Borough Council spokesman said “Maidstone Borough Council is aware of a number of vehicles that have arrived overnight and are parked illegally in the Barker Road car park. Council officers are in the process of engaging with the unauthorised encampment in order to effect a satisfactory resolution to the matter as quickly as possible.”

what is the difference between a traveller in a motor home and someone on their holiday?

An eyewitness said “How can they be called travellers when they rock up in modern motorhomes? They are just a bunch of lowlifes on their summer holidays and they want free pitches!”.

Another person added “Where are the police? Why are they not charging the owners for not having properly licenced vehicles with registration plates? If it was me, I would be arrested within minutes, but as soon as they get called travellers, the police run a mile. It’s a disgrace”.