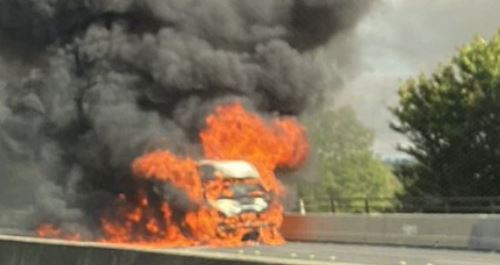 A white van which caught fire on the M26 on Tuesday afternoon has caused chaos for local traffic.

The van stopped on the hard shoulder between junctions 5 and 6 aftger smoke was seen billowing from under the bonnet. The white van was soon engulfed in flames, but luckily all the occupants escaped unharmed. Kent Fire and Rescue say two fire engines were sent to the scene and crews wearing breathing apparatus used hose reel jets to extinguish the blaze.

the owner may need to get himself a new van

There were traffic delays on the M25 and M26 as far back as junction 2a, as a result of the fire.

The M25 was closed until the early hours of Wednesday morning as urgent surfacing work was required to repair the road, due to the severity of the fire.