HomeNewsVisiting Sainsburys Has Become A Bit Expensive For Some
News

Visiting Sainsburys Has Become A Bit Expensive For Some 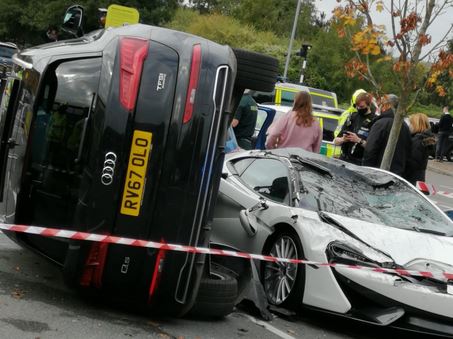 An elderly couple who visited Sainsbury’s in Sevenoaks yesterday discovered their shopping trip was a bit more expensive than they had anticipated.

The couple parked their McLaren 570s supercar in the Sainsburys car park and headed inside to do some shopping. Whilst they were pootling around inside with their trolley, someone driving an Audi Q5 managed to crash into their precious car.

It was not a small dink either as it looks like the Audi drove over the top of the £150,000 supercar. That is going to take a bit more than a polish to get that dent out.

The driver of Audi was trapped inside but was eventually rescued by the Emergency Services.

I bet they wish they had chosen a different parking space

Eye witnesses say that it appeared that the accelerator on the Audi got stuck open. It seems like the brakes and the sterring failed too. We are not sure if the Audi was an automatic?!!!

Sadly for the couple, they were not able to take their prized possession home with them. There will be some upset faces at an insurance company this morning when they read the news!