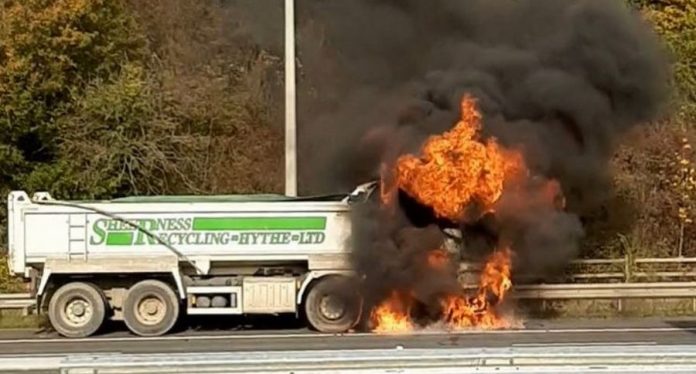 A fire involving a 20-tonne vehicle caused significant delays on the M2 on Monday afternoon. The fire is said to have started inside the vehicles cab and soon engulfed it.

The truck caught fire just after 3pm on the Eastbound stretch of the M2, just before the Medway bridge. Kent fire and rescue say they sent two fire engines and a bulk water carrier to the scene.

Thankfully there were no injuries reported.

The drivers sausages, which had been cooking on an indoor barbeque inside the cab just minutes before the unexplained fire, were totally destroyed. *

* For those lacking in a sense of humour, that last sentence is not true!

- Advertisement -
Facebook
Twitter
Pinterest
WhatsApp
Previous articleVisiting Sainsburys Has Become A Bit Expensive For Some
Next article7,532 Migrants Reach UK This Year As 100 Arrive On Monday