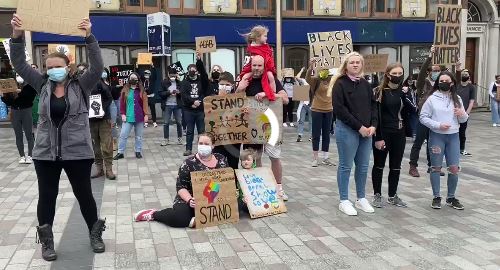 There have been several Black Lives marches in Maidstone today. A group of people met in central Maidstone this morning to protest for the BLM movement. The people largely managed to socially distance from one another and the protest remained peaceful. This is mainly due to the lack of any American police.

Another group of protesters congregated near the entrance to Mote Park in Maidstone. Sadly, none of these seemed to remember anything about social distancing, so all stood in a line along the road. Thankfully, none of the passing cars decided to stop and all kept their windows closed. This was nothing compared to the demonstrations in London, where thousands of people have been seen marching through the capital. This is the first big sign that lockdown is now well and truly over.

There were other peaceful protests taking place in Kent, from Medway to Deal. Most people are in support of anti-racism, although some were more concerned about the possibility of COVID being passed on to other people at this time. One person said “Surely black and all lives matter so stay at home until this virus is no longer such a threat to everybody.”