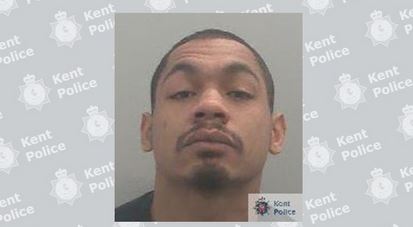 A county line drug dealer who exploited two vulnerable teenagers to sell drugs for him in Chatham has been jailed for nine and a half years.

Daniel Garcia of Morton Gardens, Wallington, Greater London, was jailed on Friday 2nd July 2021 at Maidstone Crown Court after he admitted being involved in the supply of crack cocaine and heroin, an additional charge of supplying heroin and possession of cannabis.

Garcia also admitted three counts of arranging or facilitating travel of another person with a view to exploitation.

The 23-year-old was arrested on 5th May 2020 following an extensive investigation which started after patrolling officers saw a drug exchange take place near a house in Fort Pitt Street, Chatham, at around 2pm on 12th December 2019.

Officers searched the property and inside they found 80 wraps of heroin and crack cocaine.

They also found two mobile phones which showed a lot of phone calls and text messages made to a specific number which police believed was linked to a county line drugs network.

A joint investigation between the County Line and Gangs team within Kent Police and the Operation Orochi team at the Metropolitan Police soon identified that Garcia was responsible for running the ‘Tyler’ drugs line. These two policing units were set up specifically by the respective forces to tackle county line drug dealers.

The drugs network saw class A drugs being ferried out of London and into Chatham between 1st November 2019 and 5th May 2020, the day Garcia was arrested.

Between March and April 2020 Garcia had trafficked two boys aged 14 and 15 into Chatham, where they were made to sell crack cocaine and heroin to drug users for the ‘Tyler’ drug line. The teenagers would often be missing for days without their families knowing where they were.

Garcia’s sentence is a reflection of his offending and criminality, and I hope it acts as a deterrent to others

In addition to his jail term, a 10-year Slavery, Trafficking and Prevention Order was issued.

The money recovered as part of the drugs network will also be subject to a Proceeds of Crime hearing which will take place on a date to be determined.

Investigating officer, Detective Constable Mark Donovan of Kent Police’s County Line and Gangs Team said: ‘Garcia was a calculated drug dealer who used his status among his drug community to control those around him. He specifically recruited two vulnerable children to act as drug runners for him, knowing they would feel scared and trapped and unable to escape the situation. Anyone who finds themselves in a similar position can have confidence that if they contact us we will support you and help you find a way out’.