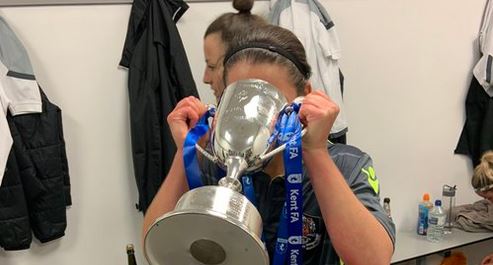 Dartford FC Women’s team pulled off one of the their best results on Tuesday night as they won the Womens Kent County Cup Final.

The Dartford team were 1-0 up at half-time and soon took a 2-0 lead in the second half. Aylesford managed to get a goal back, bringing a tense few minutes before Emily ‘The Snake’ Vaughan got the third goal to take the pressure off.

The Cup competition had started way back in 2019, when Dartford beat Margate 10-0 in the 1st Round on 15th September. They were given a bye in the second round before beating Herne Bay 1-0 in the quarter final.

The semi-final took place on 19th January 2020 and Dartford FC scraped through after extra time as they won over Gillingham Ladies 3-2, to book their place in the final.

The final has been potsponed since then due to the COVID pandemic, meaning this was one of the longest cup competitions in history. So it’s congratulations to Darford FC and a well done to Aylesford for making it to the final.