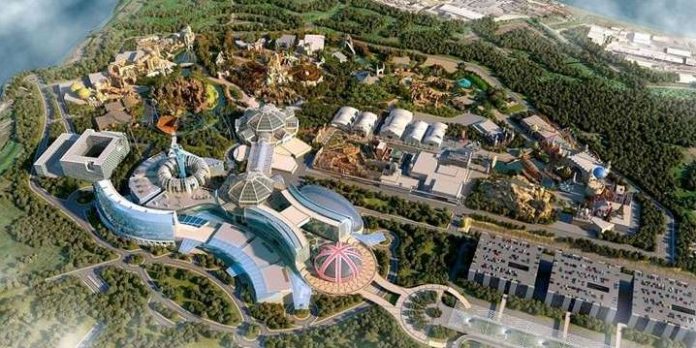 Developers of the proposed London Resort theme park in Swanscombe are looking towards a ‘digital based’ public consultation for their next steps. The £5 billion entertainment project is planning a public consultation to be held across August and September.

Due to the Covid-19 pandemic, the consultation will be a largely digital process with hard copies of information available on request. It is being billed as Britain’s answer to Disneyland it is one of the most ambitious theme park projects in Europe and would be the first to be built from scratch since the Paris attraction in 1992.

Developers have said “We obviously can’t hold a public consultation in the normal way but we will make sure we reach out to local residents and businesses as well as the wider community and stakeholders. We are talking to government about how we will be using digital technology, websites, video conferences and online question and answer sessions.”

The project has recently chalked up £50 million in losses after a series of problems since it was first announced in 2012. It was called Paramount Park, but Paramount Pictures later pulled the plug, before returning in a lesser capacity.

When completed it will be a two-part resort with the first “gate” opening in 2024 ahead of a second five years later in 2029. The plans show that 70% of the park will be kept under cover, thanks to Britain’s excellent summers.

The London Resort has already signed deals with the BBC and ITV Studios, to name some of the rides and attractions. Theme Park fans were looking forward to some Hollywood and blockbuster-film themed rides, but will have to to put up with a more traditional English feel, as rumours suggest that the park will have attractions following some of the UK’s most popular TV shows instead.

Punters will be able to avoid getting run over on a replica of Coronation Street, before getting into an booze-filled argument in the Queen Vic pub. Once finished there, you can go and pay for some over-priced souvenirs in a ‘Bargain Hunt’ themed shop, enjoy a half-cooked ‘Jamie’s 15-minute meal’ before finishing the day by throwing up in Alan Titchmarch’s garden.