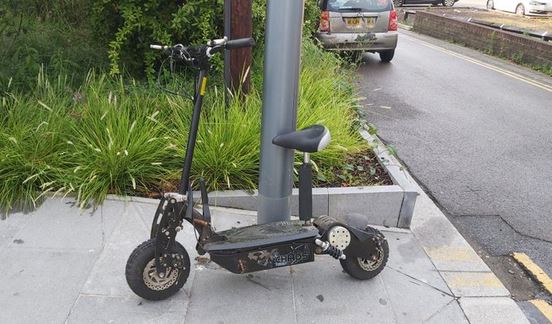 A 19 year old has been reported for driving offences after being involved in a collision with a car.

The owner had their e-scooter seized by Medway police for no insurance following a collision with a car in Strood.

There has been a big increase in the use of e-scooters, with Kent police saying that they have seized more in 2021 than during the whole of 2020.

Unfortunately, it is not currently possible to get appropriate insurance for privately owned e-scooters, meaning it is illegal to use them on the road or in public spaces.

It is legal to use an e-scooter on private land with the permission of the land owner or when a new trial commences, it will be legal to use the rental e-scooters, from specific companies on the road.

People would like to see a large scale clampdown on the use of e-scooters as they seem to be in use everywhere. It also appears to be ‘pot luck’ if someone will actually be stopped by the police for using one on the road or pavement.

With the summer holidays now upon us, it is likely there will be more children using these near their homes.

It comes after a three-year-old girl has been left with “life-changing” injuries from a collision with an e-scooter in south London earlier this week. She was in Myatt’s Field Park, Lambeth, with her family when she was struck at about 8.30pm on Monday, police said. The Met Police said the young man on the e-scooter stopped to say sorry.

It is only a matter of time until someone is seriously hurt again.