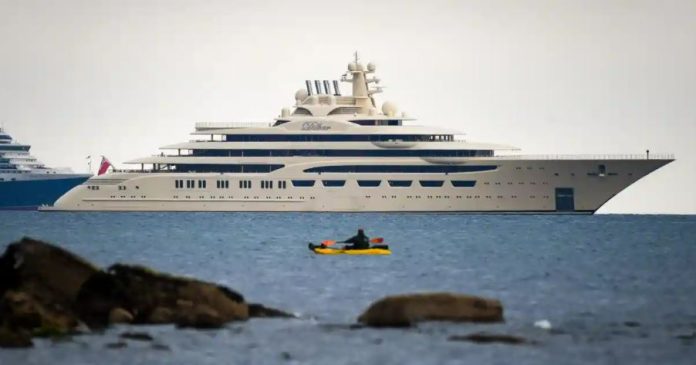 Usmanov was on a list of billionaires to face sanctions from the European Union in response to Russia’s invasion of Ukraine on 24th February.

A report said his 156-metre (512-foot) yacht Dilbar, valued at $600m and regarded as the largest motor yacht in the world by gross tonnage, was seized by German authorities on Wednesday.

Hamburg authorities seized the 156-metre Dilbar, as yachts belonging to five other Russian billionaires headed to the non-extradition Maldives for safety. The UK has also banned any Russian owned or registered ship from entering any of the UKs shipping ports after a letter from Secretary of State for Transport Grant Shapps MP was sent to all port controllers.

Meanwhile in the UK Parliament, Boris Johnson will not say if Russian billionaire Roman Abramovich will face sanctions.

Abramovich is the owner of Chelsea FC and owns a number of properties in the UK, as well as helicopters, supercars and superyachts too. The Russian billionaire is now selling Chelsea FC in a quick attempt to offload assets.

Many will say that Abramovich has only done good in the UK, although it is difficult to say if he has ties back to Putin in Russia.

Sadly for many Russians, they will have to take the sanctions and penalties for being Russian. Sports stars such as F1 driver Mazepin have been banned from driving in Britain – there is no way that Mazepin has anything to do with the war in Ukraine, but he will have to face any penalties heading in the direction of his country.

So why is Abramovich being given time to sell off Chelsea FC when other Russian Oligarchs have had high-valued assets seized with immediate effect? It is a question that Labour leader Sir Kier Starmer has been asking in Parliament.

Boris Johnson has never claimed to be a supporter of any one football club, although when he was Mayor of London he said he liked “all London clubs”, of which Chelsea is one.

Perhaps allowing Chelsea to go bust would upset a lot of influential people, so giving time for Chelsea to be sold may just be part of the plan to keep Boris in people’s good books.