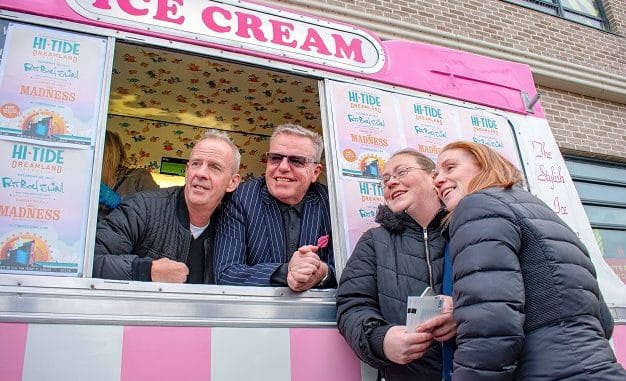 Kent locals were celebrating last Monday as news of an upcoming festival was the talk of the town. The Hi-Tide festival will be held at the Dreamland park in Margate in July.

Stars from two headline acts were in Margate giving out 100 free tickets and free ice cream too. A news reporter suggested they should have given out 99 tickets if they were handing out Mr Whippys too. Only the oldies will get that joke, but the superstars got it and agreed they had missed that particular marketing idea. The stars were Suggs from Madness and Fat Boy Slim who will be the main acts for the festival. Is he Slim or is he Fat? We don’t know but what we do know is that Suggs looked a bit more plump!

it’s margates biggest festival in years …if not ever!

People were seen queuing hours in advance to get some free ticket, although one bloke just fancied a free ice cream. The first 100 people in the queue got the freebie tickets, which is just as well as they probably do not have a job if they were available to queue on a Monday morning. Unless they do shift work of course!

The festival, taking place over the 4th and 5th July is expected to bring in over 15,000 people to the town. Should be quite cosy then.

Fat Boy Slim had the following to say “This area of the country doesn’t get served so much with the bigger gigs. I like the idea that all the locals come out, whether or not they’re actually fans or not.” So reading between the lines he either thinks that Margate has a small population of les than 100 people or he believes that they do not get opportunities to go out that often!

If you enjoy splashing your money in Margate – literally, tickets – ranging in price from £72.50 for one day to £130 for the whole weekend – are set to go on sale at 9am on Friday, 31st January. If you do go top the event, please be quiet when you leave or there is a chance you may upset those locals who will still be indoors.

Windmill In Cranbrook Opens After Renovations