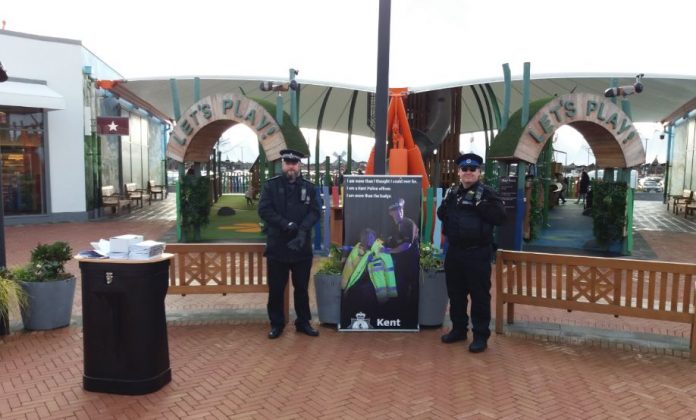 Kent Police have recently been spotted at Bluewater Shopping Centre in Kent, wiping out theories that they do not exist. Photo evidence was posted on social media of the rare sighting, which we are happy to share with you.

The photo was taken on 18th January as the police began a recruitment drive. There were fears that the rest of Kent had been left to fend for itself, but luckily no major crimes occured. As you can see in the photo, two police officers do exist and to everyones amazement, they were spotted together. A bit like busses then! They do look happy together, although the weather was a bit chilly, so you may have been met with a chilly handshake.

kent police are on a big recruitment drive

The plan for the recruitment drive was to swell their numbers to three. If you believe in statistics, that would be a 50% increase in police numbers.

The police also splashed the cash as they installed some advertising boards inside the shopping centre. Sadly, as both police officers were sticking together for safety, at their outside location, there was no-one available to talk to the public inside the centre. At least there was a small pile of leaflets and some pens for people to pinch, although they carelessly left a laptop unattended.

At ther current time we have no information as to if the recruitment drive was a success. The two officers have now disappeared back into deepest Kent and we have been unable to find their current location in order to ask them.