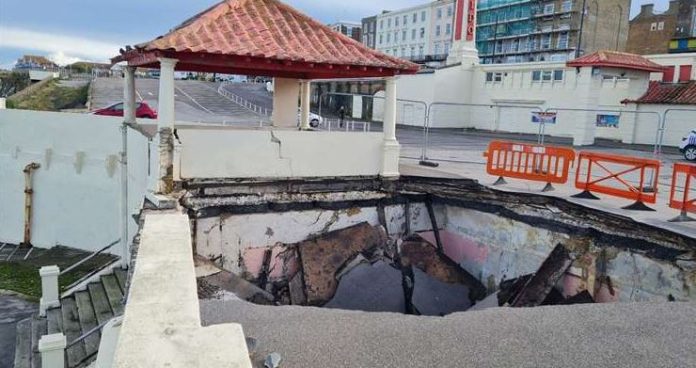 A huge hole has appeared in a car park on Margate seafront after heavy rainfall. The hole appeared after an area of the car park at Margate’s historic Lido collapsed.

The concrete surface of the car park caved in on Monday morning, exposing the lower level of the derelict leisure complex. The section of the seafront site hhas left a dangerous 36 square metre cavity.

Barriers have been erected to prevent the public getting too close to the hole, although there are fears that more could collapse over the coming days.

the site is not owned by Thanet District Council, but the authority has installed the safety barriers

The site is in the hands of administrators Duff & Phelps and was previously run by private firm Stour Side Investments.

A spokesman said: “The Lido car park is privately owned, however, the council’s building control team will be installing barriers in the car park and on the coastal path to ensure the safety of the public, and will be liaising with the owners.”

The current buildings were constructed onto and over the remaining parts of the Clifton Baths, laid out over a series of terraces.