HomeNewsHouse On Isle Of Sheppey Finally Falls Down Cliff
News

House On Isle Of Sheppey Finally Falls Down Cliff 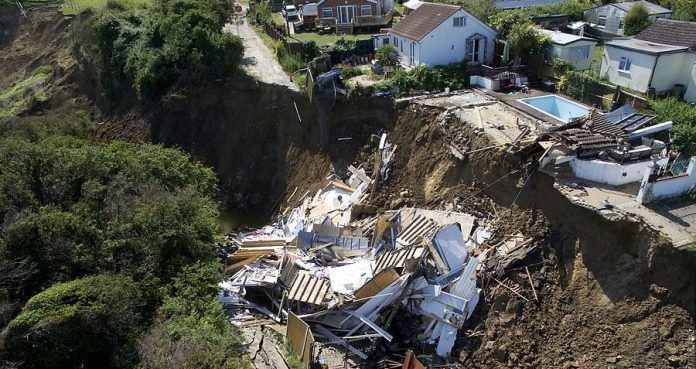 A house that was teetering dangerously on the end of a cliff after a landslide has finally fallen down. The bungalow in Eastchurch on the Isle of Sheppey was shattered overnight as ground continued to give way.

It finally fell into the void during the early hours, leaving a mother of 5 distraught. The family were evacuated on Sunday and have been put up in a house in Sittingbourne, whilst the drama unfolded.

Emma Tullett said she saw cracks appear in a brick wall on Friday and her family were evacuated once a window blind crashed to the floor. The 42-year old now says she has ‘lost everything’ as she returned today to see her home destroyed. Well, she has not lost everything, but now owns a rather large amount of rubble.

She only purchased the timber-framed two-bedroom property, complete with swimming pool, in August 2018, with the dream of raising her young family in a luxurious home overlooking the sea.  The house was not insured because the home was deemed too close to the cliff face by insurance companies. That was the big clue!

The family are now homeless after their house, ironically named ‘Cliffhanger’ was destroyed. There was the second big clue!

Other homes nearby are now at risk of a similar fate. There have also been reports of looters in the area, but when residents called Kent Police, they were told ‘it’s too much expense’. Meanwhile, UK Border Force agents happily sail past, as they spend a fortune on rescuing some illegal immigrants.

Swale council building staff were on hand yesterday monitoring any more slippage while officers handed out advice for packing ‘grab bags’ if there is another fall. If there is another fall, getting a ‘grab bag’ is a little bit too late. Perhaps they could just call in a removal company whilst the person’s belongings are still at the top of the cliff!