HomeTravelLorry Gets Stuck Under Bridge In High Brooms
Travel

Lorry Gets Stuck Under Bridge In High Brooms 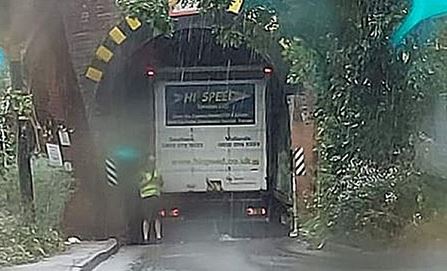 A “Hi-Speed” lorry became stuck underneath a railway bridge yesterday in High Brooms.

The incident occured between Dowding Way and North Farm Road during late afternoon, as the over-optimistic driver tried to get through the narrow tunnel, even though there were large warning signs and height restrictions clearly visible. Sadly, the poor deluded driver soon became well-and-truely wedged in the gap, stopping traffic and affecting rail services.

For the driver of the “Hi-Speed” delivery service, there will be a delay in the arrival of his goods. It is thought the driver deflated the tyres on the lorry, so it could be driven out of the tunnel.

An inspection of the tunnel will need to be done before it is deemed safe for travel. It is thought the driver of the lorry will be spending his weekend getting checked out at “Specsavers”.