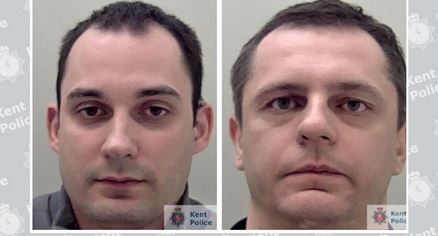 Two men linked to the supply of Class A drugs in Kent and who guarded the proceeds of a criminal gang totalling hundreds of thousands of pounds have been jailed.

Milan Kosoric and Pero Mitrovic were caught red handed by police with almost £750,000 in cash, which they kept stored in several supermarket ‘bags for life’.

The money was discovered wrapped in plastic bundles on 2 March 2021, after officers forced entry to a flat in Redcliffe Street, Kensington, during a proactive operation by the Kent and Essex Serious Crime Directorate.
Drugs supply

The cash was found in a bedroom with amounts written on individual bundles, showing how the money had been divided.

More than 100 wraps of cocaine were also seized from the property and in a nearby parked car.

Kosoric, 26, and Mitrovic, 35, had been staying at the address and were arrested.

They would later plead guilty at Maidstone Crown Court to money laundering offences. Kosoric also admitted a charge of possessing cocaine with intent to supply.

On Thursday 7th October 2021, Kosoric was sentenced to four years and six months’ imprisonment. Mitrovic was jailed for one year and ten months.

Prior to the sentence, in September, Kent Police made a forfeiture application under the Proceeds of Crime Act relating to the cash seized, which totalled £745,087. The application, which did not have to be heard before a court, was successful and not contested by either of the offenders.