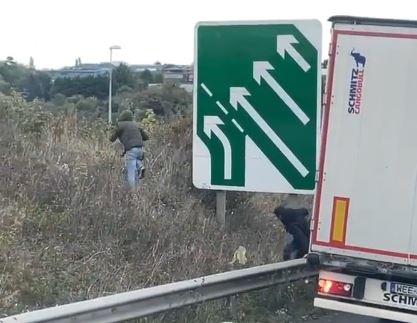 A video has been uploaded to social media showing people climbing from a lorry parked on the A2 at Bean. The video, uploaded by Jakoo, shows at least four people getting out from the curtain-side lorry last Friday, before running away up the embankment.

It is reported that police attended the scene but could not find any of the people – although we do not know how long it took the police to arrive.

It is unknown how the people managed to avoid custom checks, although it would appear from the video, that the driver stopped deliberately to let the people escape.

Following the murder of an MP at the weekend, some have been quick to say that as a country, we have been weak to let immigrants in unchecked.

Others have taken a more sympathetic view of the situation, saying “They’re climbing out of a lorry in a foreign country cold, hungry destitute how do they get money to survive? They’ll turn to crime!”