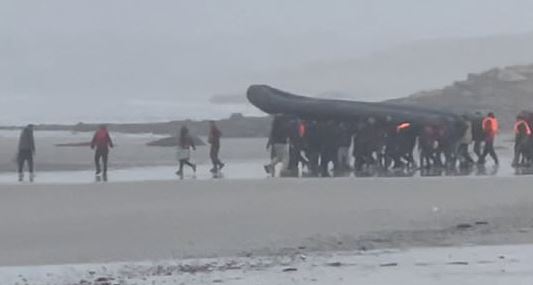 The migrant crisis appears to be getting worse by the day as traffickers were seen loading two huge 50ft dinghies on a French beach.

The boats were loaded with up to 40 migrants each on a beach in northern France yesterday morning before being launched towards Britain. People smuggling minders waded knee deep into the sea to help the the migrants clamber aboard.

It is incredible that there was no sign of French police to stop the migrants or make arrests, but there were plenty of media to capture the moment.

A few hours later the same dinghy was seen arriving on a Kent beach, with migrants fleeing as quickly as possible. The French have made it clear that they are only involved on a half-hearted basis.

Earlier in the week Nigel Farage found an abandoned jet-ski on a Kent beach. It is worrying that such brazen attempts can actually reach our shores undetected.

Social media comments show huge frustration amongst the UK population. People are saying it is humiliating with others asking how can they afford to come across in Jet-ski’s?

With all the other issues affecting the government, this is just another reason for people to ask for change. Sadly it will not come quick enough to stop the current flow of migrants.