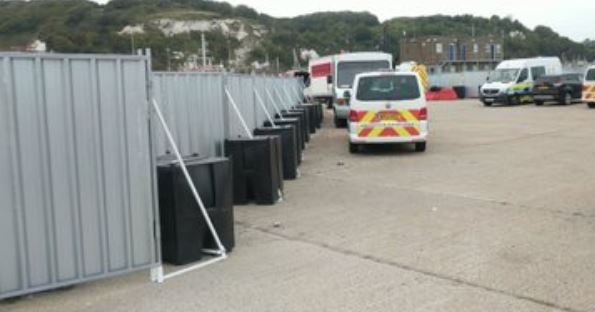 A row of new metal barriers have appeared at the Port Of Dover. The barriers have been put up to prevent people seeing a certain part of the port area.

The barriers may be in place to shield the UK border force boats arriving with more migrants. Or they may just be in place to protect some building supplies – you decide!

Meanwhile, the Coastguard has issued a warning against taking boats that have been used by migrants to cross the channel. It follows a number of thefts in recent days from beaches around Dover and Deal.

Three men have been charged after an abandoned rigid hulled inflatable boat (RHIB) was taken from a beach in the area. A Kent Police spokesman confirmed there have been numerous incidences of boats or their parts being taken.

The news comes after MP for Dover and Deal Natalie Elphicke asked for the boats to be put to good use once the criminal process surrounding each vessel has ended.

Mrs Elphicke said: “I fully appreciate the strength of feeling about the continued small boats crossings, especially where there are landings on beaches and near homes. It is an unacceptable position. I am working hard on this, and the government has outlined a number of steps that it is taking to tackle this issue”.

“I would urge people not to take abandoned and discarded migrant dinghies or engines from our local beaches. I have written to the Home Office encouraging them to look at the possible re-use of dinghies and engines for charity and rescue training, in line with a number of sensible suggestions I have received.”

Elsewhere, a number of boat owners in Calais have asked for their stolen property to be located and returned to them.