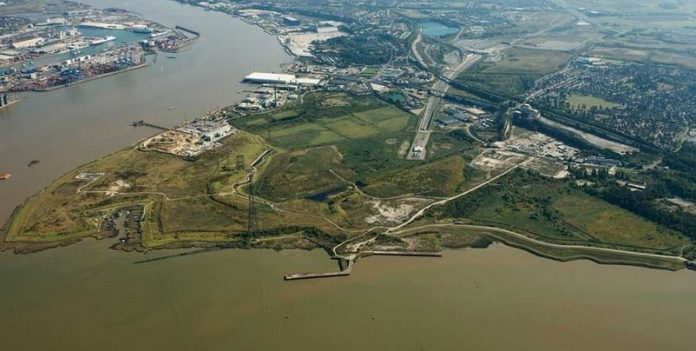 Wildlife campaigners have started a petition to save Swanscombe Marches on the Peninsula from development by the London Resort Theme Park Development.

The Swanscombe Peninsula is located within the Borough of Dartford in North Kent. Whilst the bulk of development is focused on the peninsula, the development footprint extends further afield, extending down to the A2 and crossing the Thames to Tillbury, Essex

Swanscombe Marches is an urban wilderness which is home to thousands of species, including over 250 invertebrate species which are rare or under threat. As well as abundant bees, butterflies and beetles, Swanscombe Marshes is one of just two places in the UK where you can find the Critically Endangered Distinguished jumping spider. It is home to Nightingales, Cuckoos, Marsh harriers and a thriving population of Common lizards, thanks to its array of rich habitats.

Swanscombe Marshes is not just important for wildlife. The site has been enjoyed by local people for years for walking, bird watching, angling and escaping the hustle and bustle of North Kent.

They say that “all of this is now threatened by the proposed London Resort theme park. Hyped as the ‘UK’s Disneyland’, much of the unique habitat of Swanscombe Marshes would be destroyed and concreted. The wildlife riches of the site simply will not survive this development. At a time when the value of wildlife and open spaces is being appreciated more than ever and amid a biodiversity crisis, we urge the Secretary of State to reject this unnecessary and ill thought out application”.

Kent Wildlife Trust are also in support of the petition to stop the development. They added that the site is more important for invertebrates than many of our Sites of Special Scientific Interest (SSSI). As well as the rich diversity of wintering birds and invertebrates, the site is home to threatened species such as water vole, otter, reptile and amphibian.

The London Resort Developers have tried to quell concerns over the environment by addressing some sustainability and environmental questions within their planning application. They claim the London Resort aims to be one of the most sustainable destinations in the world and they plan to run an operationally carbon neutral theme park. The planning application goes on to say the project will deliver a net biodiversity gain and will create a green network of amenity areas and parkland. These will include areas of environmental enhancement and wildlife habitat creation beside the River Thames.