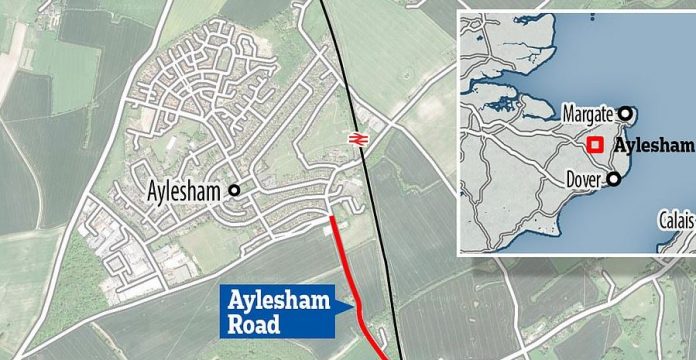 Following the murder of PCSO Julia James near Amersham in Kent, police are warning women to avoid walking in woods alone.

Mrs James is believed to have suffered severe head injuries and was found on a path at the edge of a field behind her house at 4pm on Tuesday afternoon with her Jack Russell by her side.

It comes after news broke of a female dog walker that was confronted by a prowler in a van one mile away from where the PCSO was murdered weeks later, locals have claimed. The woman is said to have been accosted by a man in a white transit vehicle as she walked along a quiet path in the village of Nonnington, Kent, two weeks ago.

Police are treating her death as murder and suspect she may have been killed by a random stranger. Officers investigating her death have now been made aware of the other potential incident earlier this month. The dog walker was allegedly pestered by the man as she walked her dog, but she managed to distract him before fleeing and shouting out for help.

PCSOs patrolling the village near Canterbury have warned women out walking their dogs to ‘veer from their normal route’ and avoid the woodland areas after their colleague’s death.

Kent Police have not revealed if they have found a murder weapon, but with officers still searching paths, hedges and woodland, it would suggests they have not. The police are still trying to work out if the murder was linked the the PCSO’s work work in the domestic violence unit or if it was simply a random attack by a stranger.