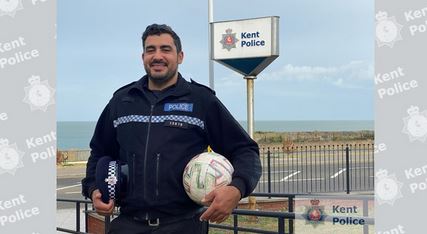 A Thanet police officer is doing what he can to give young people in the district a chance to play football.

Thanks to PC Hisham Hijazi, next month local teenagers will be able to take part in a football tournament at Hugin Vikings Football Club against teams from Kent Police and the Thanet Multi-agency Task Force (Thanet MTF).

PC Hijazi was inspired to create the event after he was called to the club grounds following concerns of suspected anti-social behaviour.

Following enquiries, it was established that a group of teenagers had accessed the area to kick a ball around. The teenagers were identified and with no permanent damage caused, they were given words of advice. However the incident prompted the Partnership officer to look at what facilities were available for teenagers in the area.

Following discussions with the football club, it was agreed that a friendly match for teenagers be arranged to give them a chance to play on a proper pitch.

On Saturday 9th October, between 12pm and 4pm, young people aged 13 to 17 are invited to take part in the Thanet Community Football Match in Dumpton Park Drive, Broadstairs.

The tournament will be a nine-a-side round robin tournament. There will be three teams, one will be made up of police officers and staff and another will be partner agencies and members of the Thanet MTF, so young people will be able to join in the fun and have a game of football.

There will also be a range of activities, coaching sessions and event stands to keep everyone entertained at the community event.

To register your interest in taking part, email mtfsportsandevents@thanet.gov.uk