HomeTravelPolice Say That Are Unable To Charge M25 Protestors
Travel

Police Say That Are Unable To Charge M25 Protestors 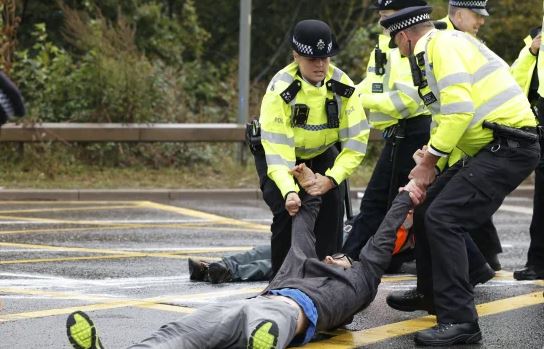 To the dismay of many motorists, the police have warned it is “very difficult” to charge M25 environmental protesters, after the same junction on a motorway has been blocked on multiple days.

Despite an injunction being obtained by the government against the group, they have continued to cause disruption on a roundabout at junction 3, the Swanley Interchange in Kent, by gluing themselves to the road.

Police arrested 11 people on suspicion of obstructing the highway and conspiracy to commit criminal damage before closing the demonstration. However, the group still returned at 1pm resulting in a further 16 arrests for the same offence.

Police have said that they are “doing their utmost to prevent the disruption”. But they have also said it is “unfair” that the police were being blamed for not charging the protesters, which meant would be able to return to the M25.

In a strange quirk of the law, the police state that “It has been very difficult for the police because if they charge the protesters with a relatively minor offence, it is likely to be discontinued. If they try to elevate the charge to a more serious one, they are finding it is not reaching the necessary threshold”. Seems very strange when people are causing such disruption!

The High Court injunction granted last week aimed to prevent people from blocking the motorway, otherwise they could be found to be in contempt of court. This carries a maximum penalty of two years in prison or an unlimited fine.

Insulate Britain do not appear to be deterred, saying in a statement: “We are going nowhere. You can raid our savings. You can confiscate our property. You can deny us our liberty and put us behind bars. But shooting the messenger can never destroy the message: that this country is going to hell unless you take emergency action to stop putting carbon into the air. Boris get on with the job.”