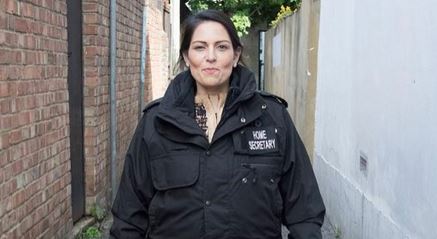 UK Home Secretary Priti Patel addressed the House of Commons last night as she did her second reading of the proposed Borders Bill, which she says will finally fix our broken asylum system.

Priti told parliament that “Our plan will increase the fairness of our system so that we can better protect and support those in genuine need of asylum. It will deter illegal entry into the UK, and importantly break the business model of people smuggling gangs and protecting the lives of those they endanger”.

Sadly, despite the seriousness of the problem, there was almost no-one in parliament to hear her.

On the very same afternoon, a record 430 people arrived in Kent, with at least 50 arriving on a beach in Oldstairs Bay in Kingsdown, to the astonishment of sunbathers.

It’s a little bit too late to be promising changes now.

In her speech, Priti has promised that “Our borders will be secure. The rules will be easy to understand”.

How will our borders be secure if we cannot even stop a dinghy with 50 people just sailing into our beaches? Our Border Force should be sufficient to stop these boats making it across, there is no need for a new bill in this regard. The fact is that it has been known for years that boats make it across, giving a positive sign to others attempting the same journey.

What is frightening is the number of people that are allowed to enter the UK legally.

Priti says that “We are building on our proud record to support those in need. Like the brave Afghan nationals who worked alongside our brave military – who are now benefiting from a bespoke resettlement scheme. In addition to British Nationals Overseas from Hong Kong whose liberties were restricted, who are now able to live freely in the UK with a full pathway to citizenship thanks to the route we opened this year”.

“We will always give people coming through safe resettlement schemes the support they need, of course that is the right thing to do. From learning English to gaining employment and training – they will gain the essential skills to build a new life in the UK”.

If you ever wondered why there was a need for so many new houses and why our councils are so hard up – the answer is right there!

The British people have already lost faith with the system, with the current government and their lack of urgency. The problem is that the bill will not even complete its passage through the House of Commons until November, and then it will be months in the House of Lords too.

This means the legislation wont come into effect until next year. In the meantime the dinghies continue unabated and will do for the rest of summer.

The new bill will make it a criminal offence to knowingly arrive in the UK illegally. Migrants entering without permission could face up to four years in prison. But charities including Refugee Action, have criticised the plans and have called them “extreme and nasty”. So we assume that the charity Refugee Action will be paying for the ‘bed and board’ for all migrants that make it to our shores from now on? Thought not!

This may be a complicated bill but COVID laws were pushed through as emergency legislation in days. The government should have sorted out the immigration issues years ago. The people have no faith that this is capable of plugging the shortfalls.