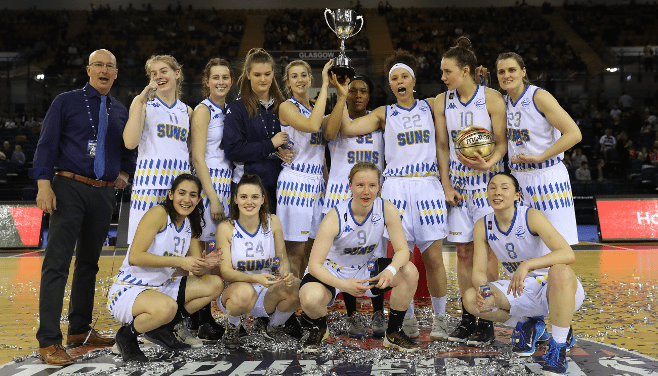 The Sevenoaks Suns Womens Basketball team have won the WBBL cup for the first time in their history. They defeated the Durham Palatinates 76 – 64 at the Birmingham arena over the weekend.

Great Britain international Janice Monakana scored 21 points in the final to lead the Suns and was named most valuable player.

The team lost last years final to Sheffield, so they were driven by the previous result to claim the win and the trophy. The Suns were formed in 2005 and play and train at a number of venues in Sevenoaks including Knole Academy.

The victory means Sevenoaks are the first team to complete a set of all four WBBL trophies and their cup win is their seventh title in the past three seasons.

There is plenty more information about womens basketball at the official WBBL website, although it seems to be broken, so they may want to get someone to fix that soon considering the amount of local interest after the victory.

For those that may be interested in the Durham teams name, a Palatinate is an awards given by Durham University to its athletes or former athletes who demonstrate the following qualities: ‘Ability of a High Standard’ (international representation), ‘Service to a Club’ and ‘Attitude and Commitment’. It is similar to ‘blues’ and other sporting colours awarded at many other British universities, although the Durham award is called a ‘Palatinate’ rather than a ‘Blue’ because palatinate (a shade of purple) is the historical colour of the university.