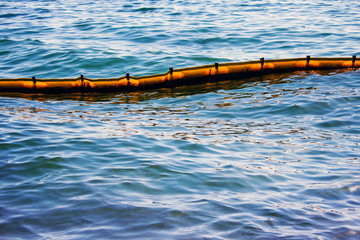 Greece has announced that it is looking to implement a floating fence in order to try and keep migrants out of the country. It wants to install the barrier in the Aegean Sea to block those trying to enter th country from Turkey. Greece are still struggling to cope with the numbers of incoming migrants and overcrowded camps.

The 2.7 kilometre long (or 1.68 miles if you live in the UK) net-like barrier that Greece wants, will be set up in the sea off the island of Lesbos, where the overcrowded Moria camp operates. It will rise 50 cm above sea level and carry light beacons that will make it visible at night.

A government document inviting vendors to submit offers said, adding that it was “aimed at containing the increasing inflows of migrants”. “The invitation for floating barriers is in the right direction. We will see what the result, what its effect as a deterrent will be in practice,” Defence Minister Nikos Panagiotopoulos told Skai Radio.

will a 50cm barrier stop people?

So how is this news to the people of Kent? It has been mentioned on national media today, that a similar barrier could be used along the coast of Kent to stop illegal migrants entering the UK.

The first issue would be, do we want a long barrier along our coastline. The channel is the busiest shipping area in the world and would a barrier even work in this area. There is no idea how much a barrier would cost, especially when you consider the miles of coast around the south-east. Not only may it prevent those coming ashore, but it would cause major issues for those who want to use the seas around the county.

The other question is of course, would a 50cm barrier stop migrants coming ashore. We think not. If customs are unabloe to stop the flow of people, how will a small barrier stop it. It may slow down the boats a little, but the boats are usually small inflatables so they will work out a solution. Those that traffic people do it as a business and they will not let a small obstable get in their way. They will find ways around it or will somehow manage to transfer people over the barrier.

Money would be better spent investing in proper custom controls and border force agents who can patrol our shores. If money is spent on a barrier, that then fails to work, we will be left with a lump of plastic polluting our seas, serving no useful purpose. Migrants will always be looking for a better life and will find a way to get around any obstacle. If we invest money in people, we can be reactive to the people bringing migrants ashore changing their routes.