Subbuteo Evening at The Magnet Micro Pub In Broadstairs 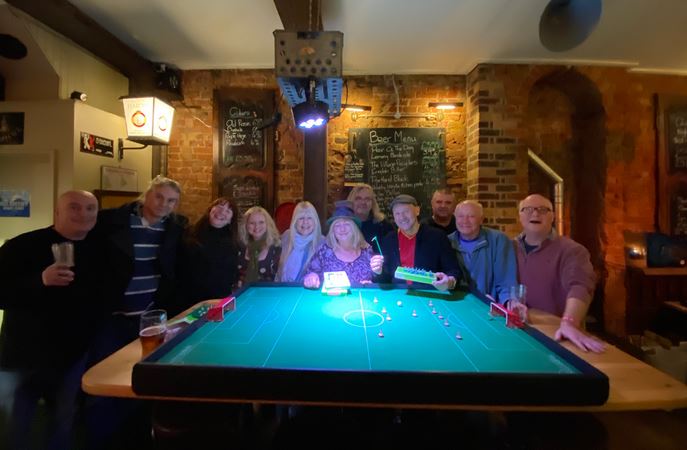 An evening of fun was had at The Micro Pub last night as a Subbuteo night took place. For those who have no idea about Subbuteo, it is a table football game. But this game is not playing with men on long spinning poles, Subbuteo is more like a tactical game of chess, but on a minature football field.

The evening was arranged via the Wobbly Hobby Shop in Faversham. They hope to have regular Subbuteo nights on alternate Wednesdays. So do not go there next week with your best Subbuteo team in hand or you will look a bit daft.

subbuteo is a great game and there are hundreds of teams

During the 1980’s you could buy virtually any team in the world with their own kit. The hobby has since disappeared from High Streets but there has always been a core following. You can still purchase Subbuteo items via some popular auction websites if you want to create your own league or just fancy owning your favourite team. The game was relaunched in the 2000’s but the figures were changed to something a little more robust – and slighlty less appealing.

There are tournaments all over the country and there is even a Subbuteo World Cup. The game is still extremely popular in Italy, which probably makes up for the failings of the national team. For now though, if you want to play the game against other like-minded people and you live close to Broadstairs, why not get in touch. For anyone else living a distance from Broadstairs, its touch luck. Not really! Why not drop the Wobbly Hobby Shop a message and see if there are any events near you.

There are lots of Subbuteo websites all over the Internet, including some photos of some incredible stadiums. Subbuteo is a bit different, takes a while to master and can be good fun for both adults and children. Let’s hope the resurgence of Subbuteo in Kent goes from strength to strength.