Armed Robbery At TUI In Chatham 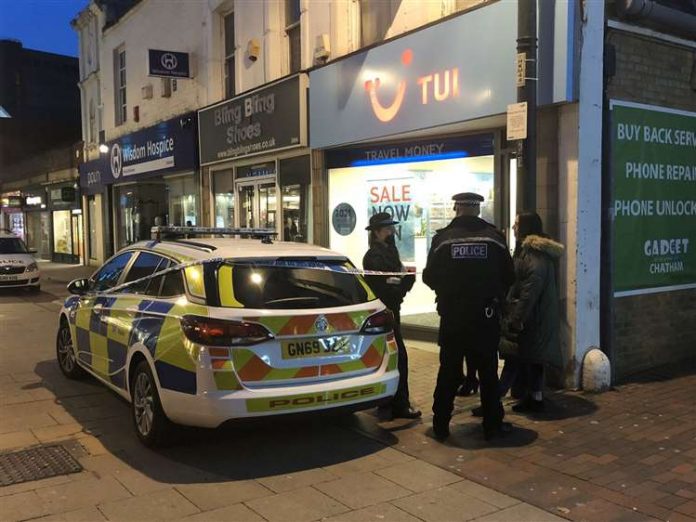 Police were called to the TUI shop in Chatham at 4pm yesterday after an armed robbery was reported. Officers arrived on site after two men threatened number staff with a weapon, before making off with cash. The police managed to use their car to block the entrance, which was a bit late as the crooks had already scarpered.

Eye witnesses said that the older man was ‘hanging around’ the shop waiting for it to be empty of customers before he went in. A nearby shopkeeper (who did not want his shop named) managed to record some suspicious activity on his CCTV. Mr Bling-Bling-Shoes said that the CCTV footage showed two men scouting out the area before they went in with a firearm, or replica firearm, and took all the currency. That’s quite incredible CCTV to see inside the TUI shop and currency changing hands!

would taking foreign currency indicate that they could be of foreign descent?

Other media reports of the crime reported that one man, who wanted to remain anonymous, said he saw armed police at the scene and there was two to three female staff members in the store who have “been left petrified”. This was clearly a very frightening time for the staff inside, but what is the medical treatment for someone who is “being left petrified”?

It is unusual for a travel agents to be subject to a robbery. Although they do hold some currency, it would not be a lot. But they are an easy target as they employ only a few staff and mostly female.

Anyone who has information or who witnessed the incident, and is yet to speak with officers, is asked to contact Kent Police on 01634 792209 quoting 12-0931.