Woman Complains Having To Walk To Gym Due to HGV Congestion 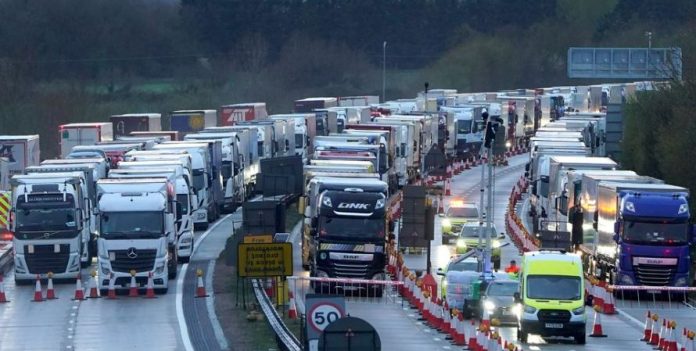 People living in Kent are looking at weeks of disruption on the roads due to the current HGV/Channel crossing crisis. Not only this, but a number of roadworks and diversions are going to add to the problem.

The current queue of HGVs parked on the M20 now extends past 23 miles. That is not a single line of trucks, this is 3-4 trucks wide, meaning that there is more like 100 miles of queues. It is thought that the current queues will take at least 3 weeks to clear, which is not fun if you are affected by it.

The crisis is so bad, that one poor Kent lady decided she had to speak out. Penny MacFarlane, who lives in the East Cliff area, felt compelled to speak to the KentOnline website.

She said “I wanted to go to the gym but unless I walk there I won’t be able to. I can’t get to Sainsbury’s either.”

Now to be fair to poor Penny, we do not know just how far she would have to walk to the gym. But it is a shame that this poor lady is unable to use exercise to get herself to the gym – in order so she can get some exercise. This really is a crisis.

The best advice we can offer this poor lady is to try going for a walk instead of going to the gym!

Despite the ongoing issues caused by P&O messing up their business, the remaining ferry operators are now back to their full complement of ships and the Port of Dover will be working with Kent partners, National Highways and Kent Police to ensure passenger journeys are as smooth as possible.

because of P&O, more than half of the freight-carrying capacity at Dover has disappeared

P&O Ferries announced on Wednesday that it is preparing to resume cross-Channel sailings.

A spokesman said “P&O is looking forward to welcoming back vital services and we expect to have two of our vessels ready to sail on the Dover-Calais route by next week, subject to regulatory sign-off, namely both the Pride of Kent and Spirit of Britain between Dover-Calais.”

Which in plain English means that the P&O ships were barred from going to sea until their ‘budget’ overseas workforce were trained on how to steer the ships without crashing into something solid! It fills you with such confidence!!!