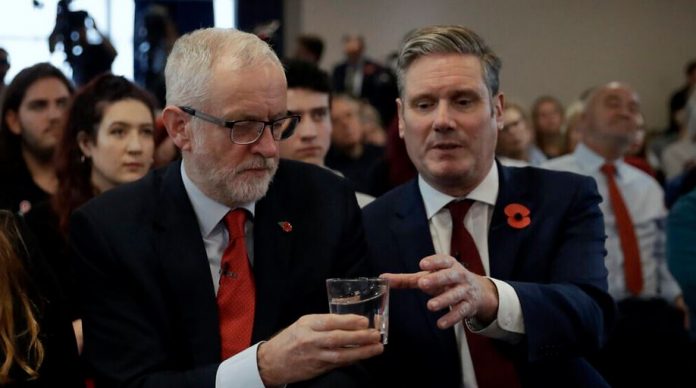 Rosie Duffield , MP for Canterbury had said during a Commons People podcast that Labour MPs, including frontbenchers, voted for Boris Johnson’s Brexit deal “with a heavy heart” and “haven’t given up” on EU membership.

Despite the UK being only in the second week of independance from the EU, she said “the majority of Labour MPs are “desperate to rejoin” the EU “at heart”.

Rosie went on to say that Labour MPs would eventually “try and shift the leadership” of the party but conceded they must “let the dust settle” on Brexit, acknowledging “We’re not talking in the next five years realistically”.

Ms Duffield is probably most famous for admitting breaching lockdown rules, after shed met her partner in her Canterbury constituency for a five-hour walk when he was still living with his wife. Guidance in place at the time in April banned people socialising with anyone from outside their own household. The MP said she took responsibility for her actions and quit her role as an opposition whip in the Commons.

Now the dust has settled, Ms Duffield is happy to stir the Brexit pot by saying “The majority of the parliamentary Labour party wanted us to remain and were campaigning really hard on that and towards the end almost all of those people had signed up towards a People’s Vote. So the majority of us, we don’t need converting again, we’ve done all that gelling together if you like, it was pretty hellish, voting at two, three in the morning on these deals and things, and all the amendments we put forward.”

It all bodes well for a new start and a unified UK outside of the EU – not! With the ink on the new deal still drying, this happy band of ‘red’ remoaners are already plotting their next move.

Despite all the scaremongering tactics leading up to 1st January 2021, the transition has gone quite smoothly so far. It is quite strange for the news pages to suddenly fall so silent when things go to plan. The scaremongers have seemingly run out of ammunition.

Ms Duffield did concede that Labour remainers may have to settle for rejoining the single market, rather than full EU membership “Certainly a closer relationship, and then there are people like me who want to rejoin. Getting those bits back even in increments is better than nothing”.

But she said campaigners in Canterbury had already started to think about a rejoin campaign. “All the groups I was involved with are already calling themselves rejoiners and are starting to think about that. I think maybe it’s a little bit too soon but we might as well start to build a movement and look at that.”

So just when you thought you may have heard the last of Brexit in the news, think again!