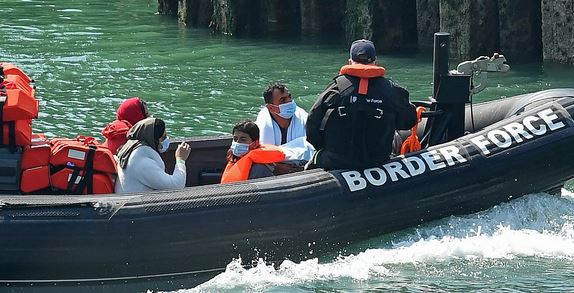 The arrival of illegal immigrants on UK shores has continued over the weekend as 35 more people made a successful journey.

The HM Coastguard Taxi Service were again on call to intercept boats struggling in the water near Beachy Head in Sussex. The organisation said it was ‘concerned with preservation of life, rescuing those in trouble and bringing them safely back to shore, where they will be handed over to the relevant partner emergency services or authorities’.

It has been reported that the French authorities managed to intercept a further 3 boats, stopping them from making the journey.

UK Nationals had hoped that after the UK left the EU, the migrant crossing would cease, especially after Chris Philp, Minister for Immigration Compliance and the Courts said: ‘People should claim asylum in the first safe country they reach and not risk their lives making a dangerous and illegally-facilitated crossing’.

‘Post EU exit, this Government will work to fix the broken asylum system. Legislative changes to the law are being made to enable cases to be treated as inadmissible if they have travelled through a safe country. The Government will continue to seek to return those with no legal right to remain in the UK.’

Eastbourne hospital is full with Covid patients, yet we still take illegals immigrants

How long it will take the Government to ‘fix the broken asylum system’ is anyone’s guess! Does it mean that anyone who arrives before the system is fixed still has a right to claim asylum?

Britain has said it will no longer accept asylum claims at sea, paving a way for those crossing The Channel to be returned to France. But the UK will not be permitted to do that until an agreement with France is reached.

Many people were quick to comment that those that arrived appeared unwell. “Will they get their COVID vaccine jabs before us?” asked one person.

Another said “We are under lockdown and cannot mix, yet these illegal immigrants turn up en-mass and get special treatment!”

Nigel Farage took the argument one step further, when he tagged Home Secretary Priti Patel in a tweet.

Nigel has demanded the Government get tough on illegal immigration instead of ‘threatening people sitting on a park bench’ – in reference to a lady who was arrested in Bouremouth during the weekend.

Police said they believed the clip was “planned, stage-managed and recorded” by members of an anti-lockdown protest group who were present in the town on Saturday.