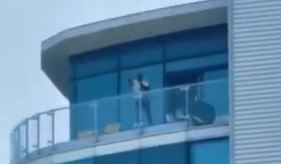 Police cordoned off an area in Chatham early on Wednesday morning, after a man was seen shooting a gun from a high balcony. Multiple gunshots could be heard as the man held a gun in the air.

The Medway tunnel had also been closed as police secure the area. It is not known why the man is firing the gun or if he is holding anyone against their will.

A video provided by Liam Wren (@LiamWren) has been posted online showing the gunman waving and firing the gun.

Further footage posted across other social media networks seems to show the gunman and his stash of weapons, which appear to be imitation guns. This is currently unverified but looks like the location in question.

The suspect can be heard shouting for the police. The police have now arrested the suspect and taken him away for questioning. The Medway tunnel and surrounding area has now been reopened.

There have been concerns about the impact to mental health that the lockdown has caused, but there will need to be an enquiry as to how someone has been able to amass such a large amount of imitation firearms.