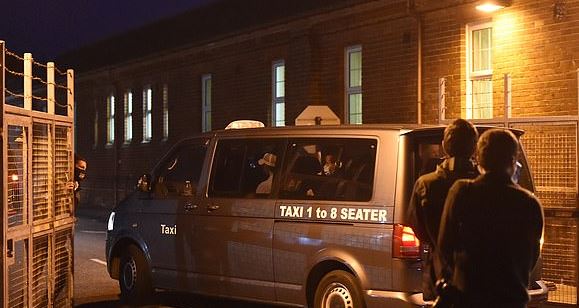 The first migrants have arrived in taxis at an army barracks in Kent which has been converted into a ‘dispersal facility’. Around 20 migrants were brought to Napier Barracks in Folkestone today in unmarked taxis.

A security guard opened the gates to the barracks. There did not appear to be any women amongst the group. The barracks have been turned into an ‘assessment and dispersal facility’ for around 400 people, where migrants could be housed for up to a year.

One of the taxis appeared to be from Crawley in West Sussex suggesting the group had been brought to Napier Barracks from the Brook House Asylum removal centre at Gatwick Airport.

The letter read: ‘We have great concerns about the impact this large open camp will have on the welfare of the local residential community and also those people in the asylum system who will be placed in the barracks itself.’

Minister for Immigration Compliance and the Courts Chris Philp MP offered reassurances in a written reply on Friday about the temporary accommodation expected to be in place for 12 months.