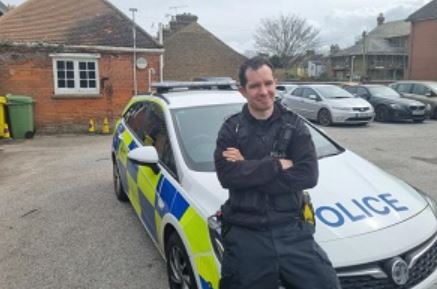 A Kent police officer headed to London yesterday as he was nominated for the National Police Bravery Awards. The winners are selected from amongst 76 nominations received from 39 forces of eight regions in England and Wales.

PC Grace and a colleague from Kent Police were called out to a road traffic collision incident near Bobbing in the county in January 2022.

The officers could see a motorcyclist had become trapped under a flat bed lorry following a collision. It was clear the rider had suffered significant injuries and was screaming out in pain.

The flat bed section of the lorry was resting on the motorcyclist and the officers knew he had to be freed immediately if he was to stand any chance of survival.

In an incredible act of bravery, given the lorry could have crashed back to the ground at any time, PC Grace crawled underneath it to drag the motorcyclist to safety.

We are all extremely proud of PC Grace, he is an exceptional officer

He then removed the rider’s helmet and performed CPR until ambulance crews arrived.

Amazingly given the state of his injuries the motorcyclist survived the incident.

“PC Grace showed exceptional courage to get to the motorcyclist and get him free from the lorry in what was a horrific incident. It was in constant danger as he did so, and I’m certain the rider would have died if he hadn’t of done what he did.

“We are all extremely proud of PC Grace, he is an exceptional officer and a credit to himself his family and Kent Police.”

Sadly, PC Grace did not manage to win the top award at the ceremony last night, as this was awards to PC Steven Denniss from Lincolnshire who managed to apprehend a double murder suspect, despite being stabbed in the leg.