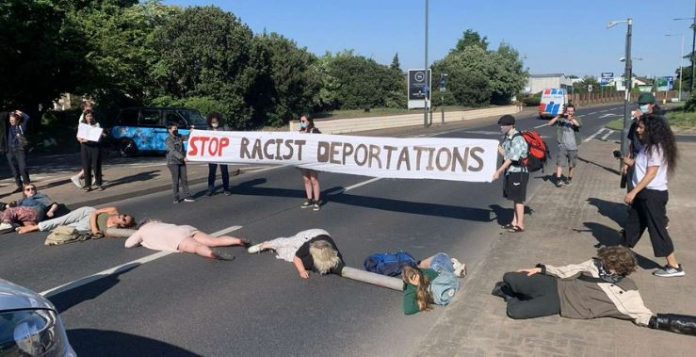 The issue of moving illegal immigrants to Rwanda moved to a farcical level yesterday as ‘Stop Deportations’ protesters locked themselves together with metal tubes and blockaded Colnbrook Immigration Removal Centres at Heathrow.

The effort of the 20-strong protesters group was to stop a coach containing five people destined for deportation to Rwanda. Surely they could have just got the 5 people to walk around the protestors and stick them on a minibus?

The effort of the 20 protestors, who look like they have never worked a day in their lives, was upstaged later in the day by the European Court of Human Rights, who stopped the flight after a late intervention. This led to fresh challenges in the UK courts, all paid for by the UK taxpayer.

The Strasbourg human rights court – part of the Council of Europe, which still counts the UK as a member, rather than the European Union – said an Iraqi man known as KN faced “a real risk of irreversible harm” if he remained on the flight. What about the risk to the British public if he doesn’t get on a flight?

Asked by reporters if the UK would withdraw from the European Convention on Human Rights, which the Strasbourg court upholds, Mr Johnson said it “very well may be” necessary to change the law. Perhaps he should have done that before the Court blocked the flight to Rwanda?

Out of the 20 or so protesters, police did tremendous work in arresting two of them. The other 18 were offered seats on the plane to Rwanda but all declined. When asked if they would like to take in some migrants, most of them would probably decline that offer too!

It has been rumoured that the flight to Rwanda cost the UK Government around £500,000. When a handful of migrants were prepared for the flight earlier in the day, it was said that the cost was around £71,000 per head. Quite a pricey flight! With no-one on the flight, it has probably become the most expensive non-flight in history.

Meanwhile, at Gatwick, hoards of queuing British holidaymakers looking to go abroad cannot get a flight for any money in the world.

Asked if the UK would withdraw from the European Convention on Human Rights, which the Strasbourg court upholds, Mr Johnson said it “very well may be” necessary to change the law

Back at Home Office HQ, Home Secretary Priti Patel said she was “disappointed” but added “Preparation for the next flight begins now”, as she got out her cheque book to write off another £500,000, using the old adage, ‘if you don’t succeed the first time, try again’.

Other staff at the Home Office chanted anther tune ‘only a fool keeps doing the same thing over and over again, expecting to achieve different results’, whilst a few others sung ‘a fool and their money are easily parted’. It’s just a shame that it’s not her money she’s wasting, its ours!

As all this was going on in Westminster, further news came to light that the UK will welcome vulnerable Rwandan refugees as part of the scheme that will see some asylum seekers sent to Rwanda.

Government documents reveal that a number of Rwandan refugees will be welcomed to the UK as part of the scheme. Part of an agreement between the two nations reads “The Participants will make arrangements for the United Kingdom to resettle a portion of Rwanda’s most vulnerable refugees in the United Kingdom, recognising both Participants’ commitment towards providing better international protection for refugees.”

So instead of us shipping out illegal immigrants, the UK appears to have signed up to a ‘swap service’, where we will receive Rwandan refugees in exchange for the ones we send to them.

One silver lining is that at least it will make use of the plane on its return trip – if it ever makes it to Rwanda!