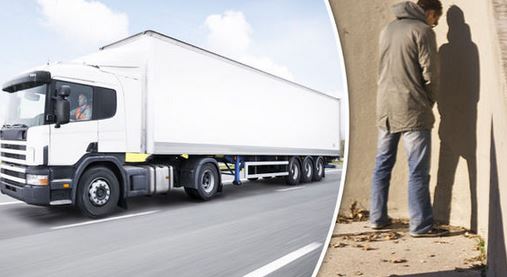 The Remainers have launched another story of impending doom for the poor people of Kent as the Brexit deadline looms.

The latest tale of woe comes in the form of an aricle in the Guardian newpaper yesterday highlighting issues with lack of toilet facilities for lorry drivers, should there be queues for Channel crossings.

The dramatic story features scary ideas such as “They say Kent’s main roads and laybys are already littered with bottles of urine and bags of excrement and the problem could become much worse after 31 December.”

Just to help give the story more traction, dedicated Remoaners such as James O’Brien from Kidderminster, who talks on the LBC radio station have retweeted the story.

James O’Brien is well known for his strong Remain views and you can indeed make the word ‘Kent’ from the letters of ‘Kidderminster’, but that doesn’t necessarily make you an expert in all aspects of life in Kent.

Those that have lived in the county for long enough, know what the problem of washroom facilities for drivers has always been an issue. Whenever the ports have been closed for bad weather or industrial action, we have had to suffer with drivers using our countryside for calls of nature.

In fact, with the number of lorries that already park up overnight in laybys and under bridges, it is a problem that should have been dealt with a long time ago.

According to the article, “The government has promised drivers there will be portable toilets if an anticipated 7,000 lorries are held up by new checks and controls in Kent’s ports if there is no Brexit trade deal. But Unite says these will not be enough to prevent fouling of Kent’s hedgerows on a scale that will horrify local residents”.

Where have the Unite union been for the last ten years? Perhaps they have not driven around the roads of Kent after dark to see how their members are coping – or not as the case may be?

A car user has no chance of stopping in a layby in the evening as they are already overfull with trucks – and there are certainly no toilet facilities anywhere to be seen!

Phil Silkstone, a regional official for Unite, which represents many lorry drivers said: “The main concern is the welfare of our drivers, but also the welfare of local residents. It won’t be nice having thousands of lorry drivers potentially using the bushes around lorry parks. All we need is proper toilet and washing facilities. The time to start installing them isn’t in January, it’s now.”

Mr Silkstone added “All we need is proper toilet and washing facilities. The time to start installing them isn’t in January, it’s now.”

No, Mr Silkstone, the time isn’t now, it was a number of years ago that someone should have considered this problem. Lorry drivers haven’t just started to need the toilet in 2020!

The problem may become worse with Brexit, but it is a problem that has always been present. It is a problem that should have been rectified a long time ago and now the Remainers are using it as another lever to unsettle the Brexit process.

The Government have said that they are working on washroom facilities for lorry drivers who may be stranded in January. There are no excuses, they have had fair warning so they need to get it right.

But do not let this be a temporary fix, the people of Kent need something better. A proper, more permanent fix to this disgusting problem. They also need to ensure that if there are enough facilities, that drivers use them. Anyone who is found doing otherwise without a good reason, needs to be fined.

Perhaps there ca nbe some positives that come from Brexit after all!