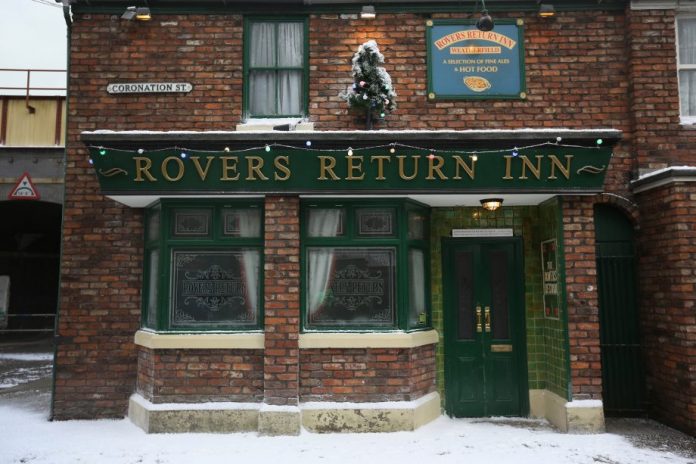 With Christmas less than a month away, it’s time to start thinking about setting up the recorder ready for all the great TV that’s going to be on. There is never much else to do at Christmas, it’s cold and wet outside and no-one likes playing Scrabble or Monopoly after a big meal. So what do we have to look forward to?

Coronation Street: The favourite for all soap fans. We don’t want to give any spoilers away (there’s plenty of that on the Internet already) so let’s just say that something bad will probably happen.

Eastenders: Another soap opera and there is always a bit of drama in Albert Square at Christmas time. Just expect someone to be injured, a big argument and a sad character to end up homeless and you won’t be disappointed.

Emmerdale: Yep, this soap will also be on at Christmas, but as no-one watches it, who really cares! Just be assured that something awful will happen.

plenty of great television to look forward to – now where’s the alcohol?

Mrs Browns Boys Christmas and New Year Special: The programme that everyone loves to hate is back on again this year, can you believe it? If you are not able to stomach it at Christmas time, make sure you keep away from your television at New Year or it will be a bad start to 2020.

Holly Willoughby & Bradley Walshs Take Off: The happy duo team up for a ‘new family entertainment show’, which is full of fun, games and surprises. So basically they have ripped off the ‘Surprise Surprise’ format. There will lots of cringe worthy moments and Holly will remain smiling throughout. The programme will end with a spectacular finale, where a chosen person will be sent off to Lapland.

Call the Midwife 2019 Special: Someone will have a baby – at Christmas. We’re guessing it will happen in a stable, with some shepherds. They probably won’t call the baby ‘Jesus’ though!

Michael Ball and Alfie Boe Special: Plenty of singing from the two happy chums. Watch out for them unashamedly plugging their latest album, which you will probably have already received for Christmas from Aunty Maud.

Gavin and Stacey Christmas Special: Don’t you hate these one off specials. We never watched this in the first place and anyone that did see it years ago, has probably forgotten which one is Gavin and which is Stacey. There may even be a guest appearance from James Corden, who may fly in for some extra turkey.

Great British Bake Off: As if you won’t have seen enough food over Christmas, you can push yourself over the edge by watching some people make some exceeding unusual cakes. What is even more strange is that it was probably filmed in Summer, so whilst the icing will be melting, Henry the cameraman’s assistant, will be trying to cover the grounds outside the tent with fake snow.

The Tiger Who Came For Tea: An all-star cast star in this adaption of a children’s book. It will probably be sickly sweet and finish with a happy ending. Sadly it’s only on for 30 minutes, so there’s not much time to poor huge amounts of alcohol down your throat whilst the children are engrossed.

Dracula: This three-part adaption of a classic is enough to ruin anyones Christmas. If you don’t enjoy the first part, you only have another two to sit through, as no doubt there will be one member of the family that will want to watch it. Lots of blood and gore will be featured, just what you wanted when you have young children about.

Michael McIntyres Big Christmas Show: The man whose name is a cross between McDonalds and Kwik-Fit is back for a Christmas special. Which will be exactly the same as all the other shows he has put out this year. There will be plenty of smiling and fake laughs as Michael humiliates more of his fans and breaks into their houses in the middle of the night, so he can gawp at them in their pyjamas.

Friends Reunion: Was It Worth The Wait?