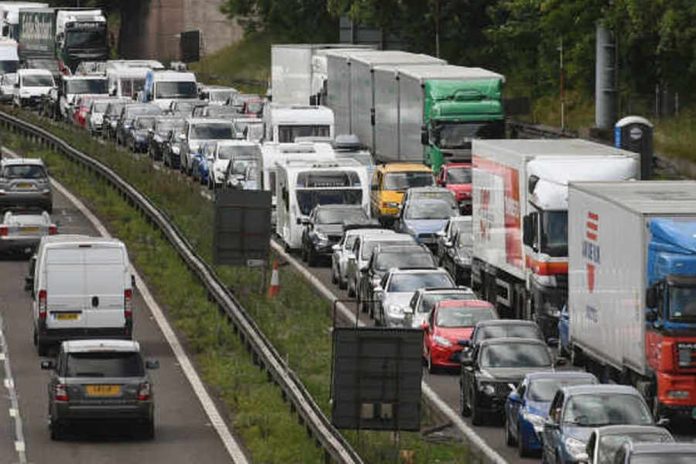 The Christmas getaway begins today, if you believe anything written by the mainstream press. This is the day of the year that you are more likely to be stuck in traffic

That proved to be true for a number of motorists who were trapped in 30 minute delays heading eastbound between the M26 and Leybourne. A lorry had hit the back of a small car, which caused two of the three available lanes to be closed. Whilst there were no emergency services present and no-one appeared to be injured, the two vehicles were left abandoned on the motorway.

They were probably waiting for recovery trucks, which no doubt, were also stuck in the long tailbacks. Luckily as this was a smart motorway, there is no hard shoulder for the recovery trucks to arrive at the scene of the accident any quicker.

once again a smart motorway proves it’s not very smart

Kents roads now seem to be clear for now, but be prepared for the ensuing chaos later on. With schools all now closed for Christmas and a large number of teachers on holiday, long delays are expected later on.

The rest of Kent continues to work into next week, but will no doubt get caught in the rush hour this evening. There are usually plenty of traffic jams in Kent, so tonight should really be no different, except that there will be a few more teachers in cars ahead of you, as they endeavour to get to the airport or Bluewater!

The monsoon rain should continue into the weekend too, meaning that anyone who attempts to get up to 81mph, if that’s possible, will have an accident. Drivers should adjust their speed according to the conditions, which means that reducing your speed to 79mph will not be enough. Be ready for a long journey later on, pack your car with plenty of snacks, warm clothing and a bucket in case you get caught short.