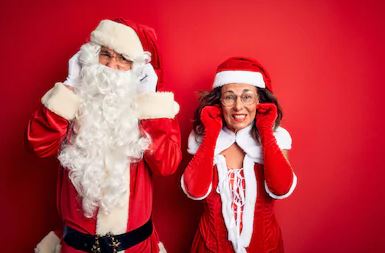 With Christmas only a few days away now, some people get excited in anticipation of what song will be Number 1 in the UK charts. As Christmas Day is on a Wednesday this year, whoever makes it to the top of the chart later on Friday will be the top song for Christmas.

Due to a change in how the charts are calculated, older songs now have a chance to make a return. This is because the charts now include downloads and radio plays, so any song that gets repeated every hour on the radio can make a sudden jump in chart position

When they redesigned the charts, perhaps they should have banned Christmas songs, as these get played on repeat during the festive months, even if nobody likes them. Okay, there may be a few annoying people that pretend to be festive and say they like everything about Christmas including the songs, but for the majority, they would prefer to push cheese and pineapple sticks in their ears than hear another Christmas medley.

So who are our top tips for chart success this year?

Dance Monkey – Tones & I – This song has been keeping the top spot warm for a record number of weeks, so you would have to be a complete muppet not to think it may continue. This rather annoying song is boosted by a weird video which has helped it retain its place at the top. This could stay at the to but we have a feeling it may fall.

Own It – Stormzy / Ed Sheerna / Burna Boy – Ed Sheeran makes his bid to become top Christmas boy this year in this match up with Stormzy. Ed has dominated the charts over the last few years and this was 2nd in the chart last week. Could it knock Dance Monkey off the top at the last minute? We think it could.

they really need to ban christmas songs from the charts

Don’t Start Now – Dua Lipa – Probably our personal favourite in the top 10 right now, as Dua supplies another catchy dance tune. Sadly, this has already begun to drop and seeing their is no sign of Christmas debaunchery in the video, we don’t hold much hope for this.

Before You Go – Lewis Capaldi – Another dreary song from the young crooner who seems to have a large fan club. This song could push you over the edge is your having a bad Christmas already, but could be an outside shot for the top spot.

All I Want For Christmas Is You – Mariah Carey – The first of the Christmas song onslaught comes from Mariah. This song has already makde it to the top of the charts in the US, but let’s hope it doesn’t do it here too. There is far too much happiness in this song which is not good for our digestion.

Last Christmas – Wham – Poor George Michael died on Christmas Day, but that is not the reason the song is a contender, it’s just because people keep playing it. Although the tune is catchy, it’s quite a miserable song in reality which should go well with the Christmas scrooges. But it is still about Christmas, so it cannot be allowed to win!

River – Ellie Goulding- The strangest song we have heard in a long time. It seems to be a tinted with a Christmas vibe, but then Ellie sings that she skates off down the river. How bizarre. We are not sure that she has enough fans to make it to number one, but it is only of only a few songs that is still ascending the charts.

I Love Sausage Rolls – Ladboy – The YouTube celebrities are back with another charity song, full of laughs and innuendos. Although not anywhere in the chart last week, there is an outside chance they could make a dramatic rise up the chart. They were number 1 last year, could they make it two in a row?

Adore you – Harry Styles – We could not complete our singles rundown without mentioning Harry. This song appeared at number 11 last week, which should secure it some more radio airplay. We think this one will continue to rise like a well-mixed yorkshire pudding, but not all the way to the top.

I Love Sausage Rolls by Ladboy – The charity song from the YouTubers came from nowhere to be the Christmas song for 2019, and gave Ladboy a famous 2 in a row Christmas number 1’s. The week after Christmas, the song fell down the charts like a stone!